In 2017, international organization Rewilding Europe in cooperation with ARK Nature proposed a new approach to the protection of scavengers and biodiversity of European landscapes. The Circle of Life project is aimed mainly at changing the modern paradigm of managing the carcasses of herbivores in nature. What is aesthetic in our perception, for nature is not always good – from mowing lawns and raking leaves, ending with “cleaning” and disposal of dead animals. We should rather look at the ecosystem holistically – as a self-propelling mechanism in which every element matters. Carcass too.

Carcass – a lost link in the food chain

Not so long ago, the scientific and pro-ecological communities had to strain large energy resources in order to sensitize society, and especially state authorities, to the role of dead wood in the natural forest ecosystem. For many of us (but still not all), fallen, decaying trees in the forest are a good sign and a desirable situation. Although dead animals are as vital a source of life as dead trees, we find it much harder to accept their presence. 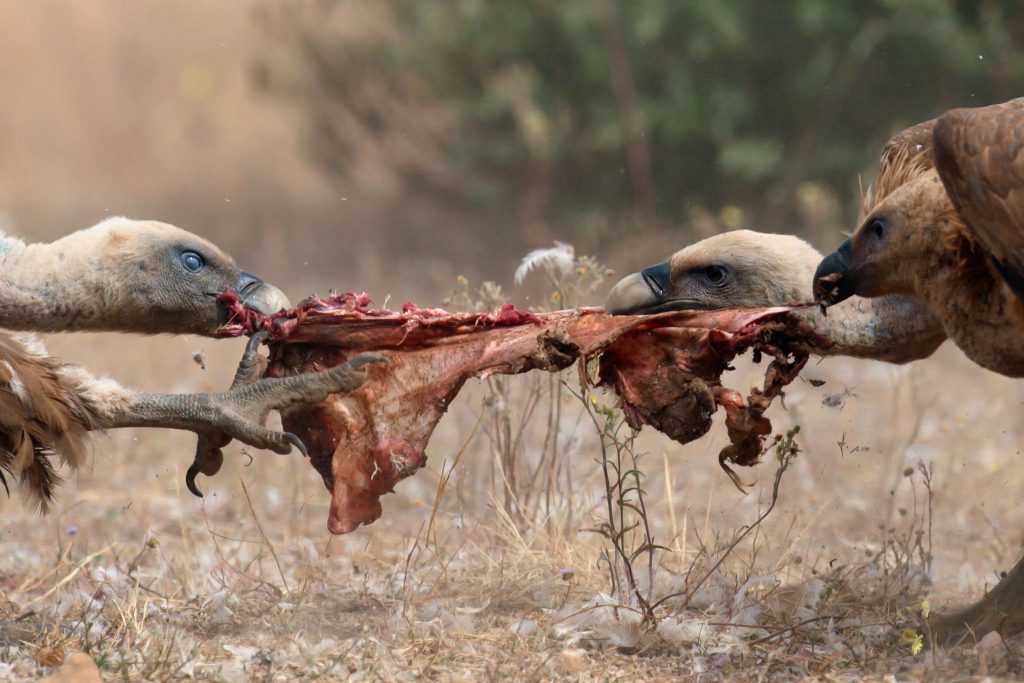 Perhaps because the presence of carcass in nature is no longer obvious. Today, on our continent – where semi-wild farm animals are subject to agricultural law, populations of wild herbivores are kept in a low density (shot as part of the hunting economy do not stay in the ecosystem), and animals hit by cars immediately disposed of by road managers – large animal carcasses are a scarce “resource”. The carrion has largely disappeared from European ecosystems and is no longer part of the natural life cycle. European vultures, for example, are fed artificially – without it their population would not be able to survive.

The small amount of carrion in the environment is a huge loss not only for the most iconic scavengers we think of at first glance, but for hundreds of larger or smaller organisms. Vultures and kites are not the only animals that use the bodies of dead animals. Carcass is an important source of food also for hunting predators – especially in winter and for young, inexperienced individuals who have still little success in obtaining food on their own. It is also a very good source of energy for animals in the period of growth, which need a lot of it in a short time – e.g. ravens. 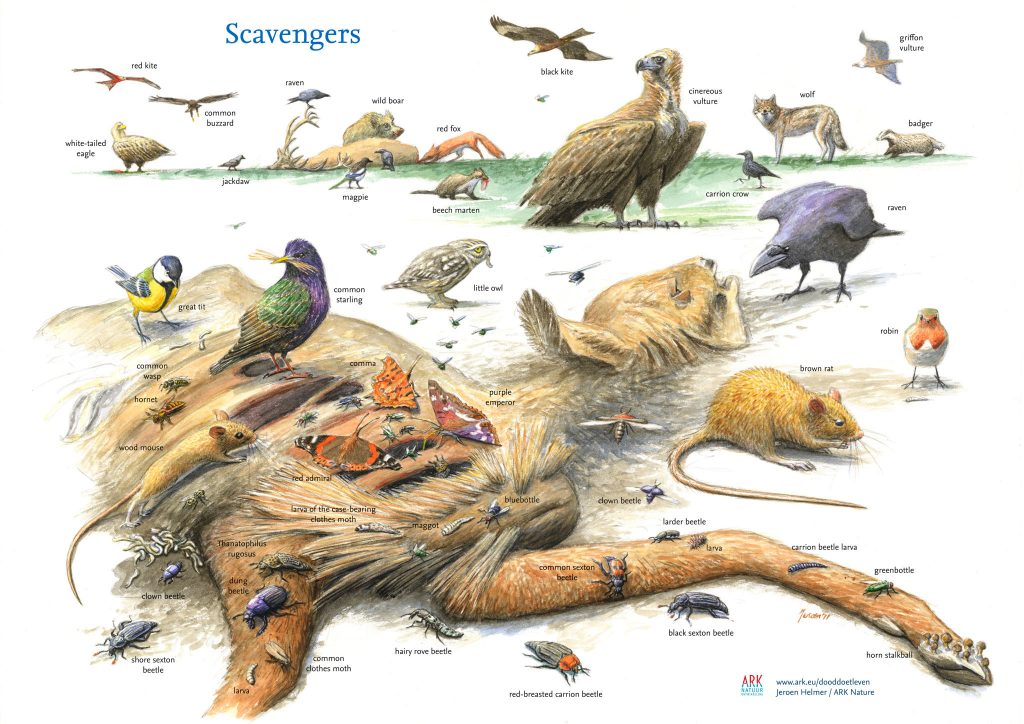 You can think of an animal carcass in terms of the ecosystem itself. In the summer months, thousands of small invertebrates (including 750 species of beetles, 150 species of flies and a large – though unknown – number of butterflies, grasshoppers, ants and wasps) can benefit from the remains of a dead animal. Insects of various colors draw to them from a radius of even several kilometers to reproduce in abundance. For many species of arthropods, carrion is essential as a habitat for a specific developmental stage. The multitude of flying and crawling organisms, in turn, is an abundant buffet for insectivorous amphibians, mammals, reptiles and birds.

Remains of large animals as a source of nutrients

The carrion of large animals is a valuable source of energy for other animals, but also minerals and water for soil microorganisms and plants – in a relatively long time perspective. Nutrients and minerals, such as phosphorus, potassium, sodium, magnesium and calcium, absorbed (eaten) by the animal and incorporated into its tissues during its lifetime, can return to the local circulation thanks to decomposition.

Large, slowly decaying bones that have not been eaten by specialized animals can replenish minerals in lime-poor soil for up to several decades. They are also an important habitat for mosses and fungi, and even for highly specialized species, including, for example, a fly that feeds on the bone marrow of dead animals. Thyreophora cynophila, from 1850 until 2009, was considered an extinct species whose habitat simply disappeared from ecosystems. Today we know that it survived, but the area of ​​its occurrence is very limited – especially considering the small number of places with little human interference in natural processes and obstacles preventing the movement of large animals.

The new-old look of Rewilding Europe

A few simple treatments can help to protect European scavengers and all other organisms that use animal remains. This can be both limiting the disposal of animals killed by roads (and placing them away from car traffic to prevent further accidents involving scavengers), and the protection of large predators that increase the amount of carrion in the environment and the introduction of large herbivores (or limiting their killing, taking them from the environment by hunters) or simply refraining from interfering with the decomposition of large animals. Carcass, which is placed in places strategic from the point of view of endangered species, can also be a unique place for nature observation. 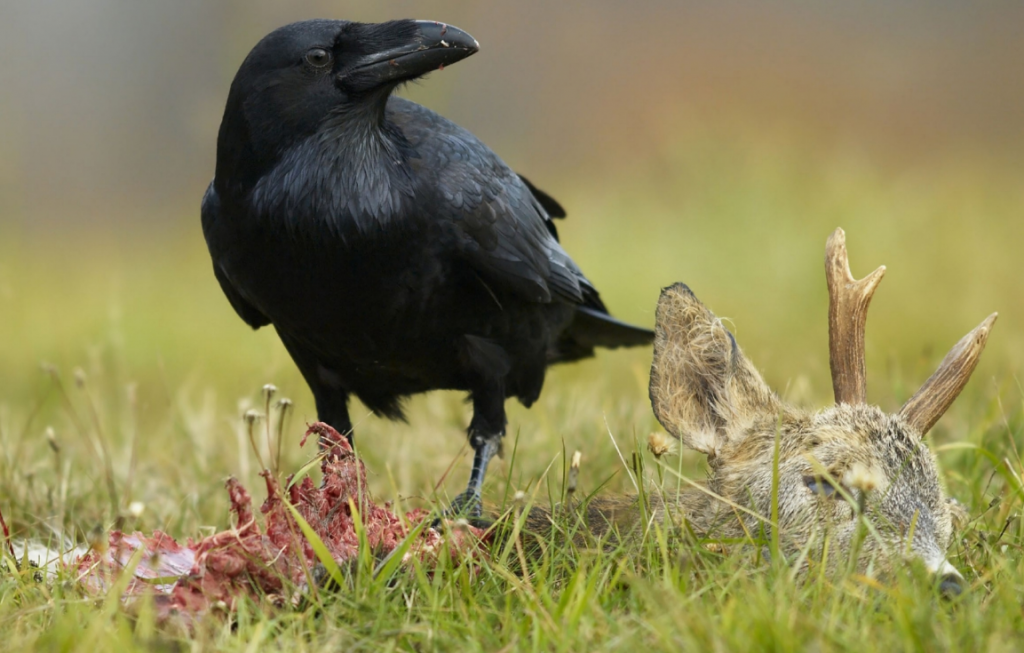 The aforementioned organization, Rewilding Europe, proposes a new look at animal carcasses in nature – not only as a lost life, but also its source. As a kind of closure of a disturbed “circle of life” in which a dead body has been taboo until now. Of course, every death is a loss – but for some it is also an opportunity. This is not new knowledge, but it is certainly worth recalling.

The photos in the article come from Rewilding Europe materials.