Home » biodiversity » Feral cats in Australia – what is going on?
biodiversityecology

Feral cats in Australia – what is going on?

Feral cats in Australia have recently been a hot topic. The problem became more prominent in 2015, when the Australian government decided to take urgent steps to combat this, probably the biggest, threat to the native fauna. The strategy for the protection of endangered species assumed killing of 2 million cats by 2020 [1]. Just over a year since the announcement of the plan, thanks to commitment of both the government and residents, Australia managed to kill as many as 211,560 these animals [2]. Wait, but why? Although statistics arouse the fear and opposition of animal activists, the situation that forces to take such drastic steps is neither simple nor straightforward. Both ecologically and politically.

Estimates developed by various institutions fluctuate significantly, but it’s currently assumed that there are about 2.1-6.3 million feral cats in Australia [3]. As you know, cats are skilled hunters with high adaptability – when introduced to nature, they become dangerous, invasive species. A meta-analysis of over 100 independent studies [4] has shown that these animals kill approximately 815 million Australian mammals annually. Adding domestic and other, unidentified cats to the calculations – the total number of mammals they kill is 1.144 million. Slightly less than half of them are native species – often few and threatened with extinction. The estimates are obviously not complete, because mammals make up about 70% of the cat’s diet. Other sources say that feral cats kill additional 272 million birds (99% of native species) [5] and 466 million reptiles (including several endangered species) annually [6].

The intense predation of such a high number of feral cats is often associated with the extinction of many native species of animals in Australia. Cats, according to official government information [7], pose a real threat to 35 species of birds, 36 mammals, 7 reptiles and 3 amphibians. The density of feral cats in Australia is currently estimated to be smaller than that reported in North America or Europe [3]. Still, they pose a far greater threat here than anywhere else. Australia is the only continent (except Antarctica) on which cats haven’t evolved naturally. That is why the government, acting in defense of the native fauna and ecosystems, decided to take drastic steps in the fight against such state of affairs. 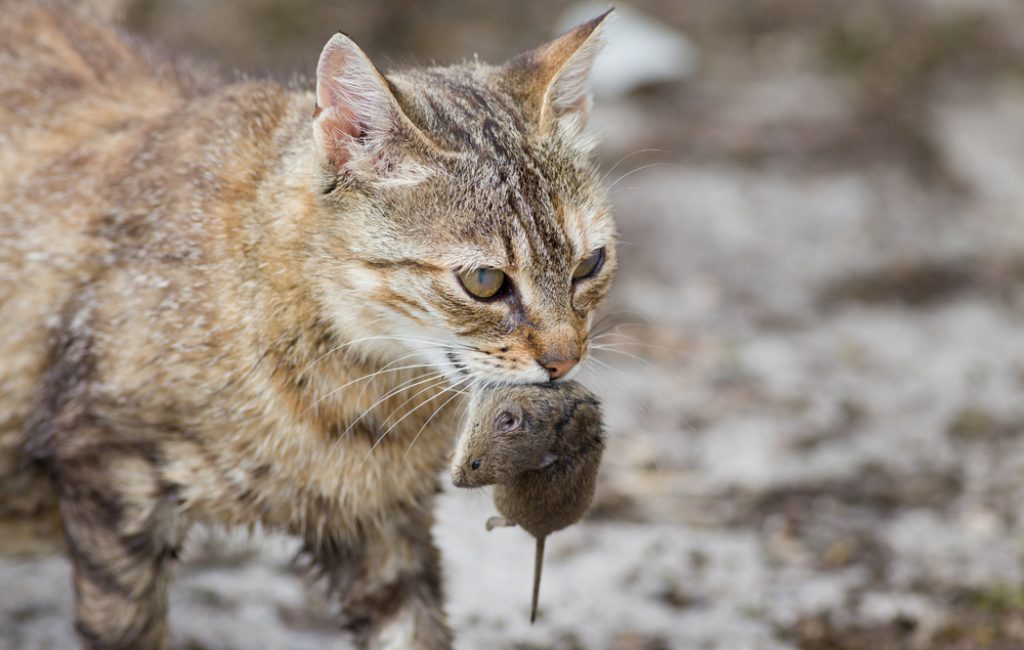 There are several ways to fight cats in Australia. The most preferred method of killing cats by farmers and sport shooters is shooting with firearms [2]. A slightly less demanding variation of this type of extermination is shooting the cat after trapping it. How to effectively involve people? Set a cash prize for each individual killed – 10 dollars for an adult and 5 for a kitten [8].

Residents who don’t feel like killing these animals themselves, are being involved indirectly. For example, they can mark the location of individual’s observation using the FeralCatScan website (and an app). Such a tool is to help in estimating threats and better targeting. However, the Australian government has another ace up its sleeve. Due to the low effectiveness of previous actions and the need to intensify efforts to combat pests (official government position here), another controversial attack has been launched in recent years. It looks like Australia has officially declared war on feral cats – using poisoned sausages.

In the fight against Australian cats, two poisons were developed – Eradicat and Curiosity. In both cases, the medium is a sausage, made of kangaroo meat, chicken fat and a pinch of flavor enhancers, extremely attractive to predators. The poisonous component that causes death in animals that eat such a sausage is a substance called PAPP (para-aminopropiophenone) in Curiosity, and the agent (commonly used in rodent poison) called 1080 (sodium fluoroacetate) [9] in Eradicat. Curiosity has less potential toxicity to non-target species, but Eradicat is used much more often because of its higher efficiency.

Although field trials have shown extremely different interest in poisons, sausage with a high 1080 content began to be dropped from aircrafts across the country. This time not only cat lovers and animal rights activists are protesting, but also some scientists. 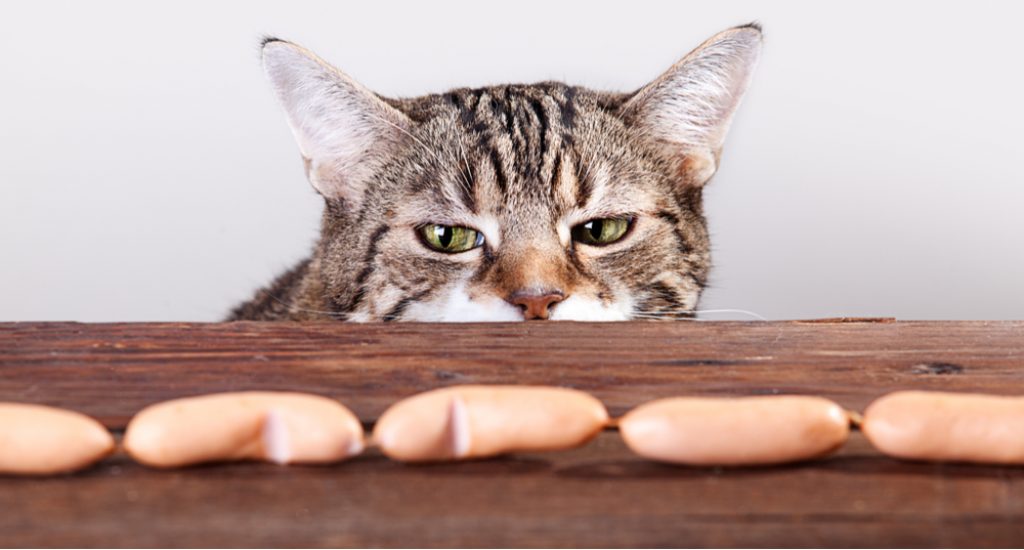 In 2004, an estimation was made of how many animal species are exposed to accidental poisoning with the toxin contained in the Eradicat bait [10]. It turns out that even the safer form of the bait (with poison enclosed in a capsule) can be eaten by at least 221 native species. The bait producers claim that it has a high species specificity and is not harmful to animals other than feral cats. Indeed, some species in Australia, mainly herbivores, are resistant to sodium fuoroacetate because they coevolved with endemic plants that naturally contain this substance [10]. Unfortunately, not all species tolerate the toxin, and the specificity of the placement of sausages for cats causes risk of unwanted exposure (to a greater extent than similar poison buried for foxes). The Tasmanian devil (Sarcophilus harrisii) proved to be particularly susceptible to intoxication. Let’s not forget about the likelihood of secondary poisoning in scavengers who could eat the corpse of a 1080 poisoned cat.

Mass laying (or rather dropping from planes) of poison for feral cats is undoubtedly risky. The more so because the aforementioned recommendation to kill 2 million cats by 2020 was planned before an attempt was made to accurately determine their actual numbers. Still, it seems to be less invasive to native fauna than predatory pressure from cats. And how should one assess the situation here?

Of course, in all this confusion voices of opposition break through [11]. Mass killing of cats can also have significant consequences for ecosystems. Disturbance of the key species presence (which, unfortunately, feral cats have become in many places in Australia) can increase the activity of other predators, disrupt the behavior of victims, and finally – through cascade events – even change the structure of vegetation. This seems to be a risk that the Australian government has accepted.

An important phenomenon to pay attention to is the so-called compensatory immigration. This event, well known in ecology, occurs when eliminating predators from a given area causes an increased influx of individuals from other areas, filling the “emptied” ecological niche [11]. This has already happened in the light of Australian anti-feline activities. In order for mass killing of feral cats to be justified, it must be a long-term practise (which increases the risk of the toxin spreading in the environment).

Perhaps we should also consider the issue of feral cats themselves and the ethics of dealing with them. Putting the potential good of biodiversity above the lives of individuals is not obvious to everyone. Especially that it’s not entirely clear what effects it will bring. The very use of poison causes a moral doubts for many people. In carnivores, it causes convulsions, lung failure and ultimately death by suffocation. The assessment of humanitarian 1080 on opossums was determined by The National Animal Welfare Advisory Committee at 6 (where 1 was the most humane solution and 8 the least) [12]. Undoubtedly, therefore, death through poisoning is not entirely painless.

If we don’t accept unnecessary suffering, we should consider whether there are alternatives. We probably all agree that just as the suffering of animals, which today bare the consequences of human stupidity, is out of place – so it would not be right to abandon all activities and allow the destruction of natural ecosystems. Fortunately, scientists offer several solutions.

One of them is to increase competition between feral cats and native predators. Thanks to conservation and reintroduction programs for such animals, e.g. the Tasmanian devil, they could displace the invasive species and restore the natural structure of Australian ecosystems [11]. A helpful parallel action is to preserve plant formations, which are a natural shelter for victims. Responsible management of greenery, and even intentional sowing of soil have repeatedly resulted in positive effects in the protection of small mammals in Australia. 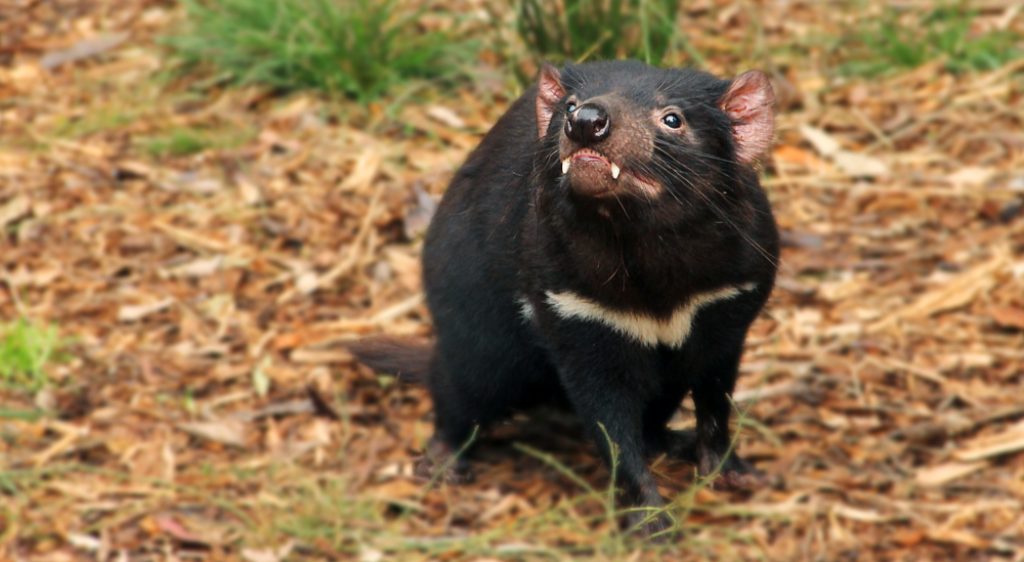 Scientists also suggest creating fenced reserves and relying on deep analysis of behavioral ecology. However, these are vague ideas or generalities for which implementation Australia simply lacks time.

In such drastic government behavior in the name of protecting biodiversity and natural ecosystems, there is so much inaccuracy that some even consider it as a political move [13]. Such action, as well as any controversial political decisions, can be interpreted as distraction, diverting public attention from other problems. On the other hand, in times of climate and ecological crises and the sixth mass extinction, a government that makes immediate, sacrifice-making decisions to protect biodiversity can be seen as proactive, responding to the most urgent problems. Some even claim that anti-cat policy in Australia has been an element of maintaining the right-wing Australian Liberal Party and part of its anti-refugee policy (combating invasive species) [14].

Such interpretations of the decision to kill cats are favored by not very strong scientific grounds for their extermination. Nevertheless, such theories should be treated with a high degree of caution. What the situation in Australia really looks like and what will result from the government’s actions – we will probably find out in the future. We leave the matter of resolving ethical problems to your conscience and rationality. Unfortunately, there are no good answers here.

Vaporization - everything you need to know