Home » biodiversity » Fires in Siberia – how dangerous is it?
biodiversityecology

Fires in Siberia – how dangerous is it?

The Russian taiga has been burning constantly for several months now. Fires in Siberia occur every year, but never before on such a large scale. The fire has already consumed several million hectares of forests. In the Krasnoyarsk Krai, Buryatia, Yakutia and Irkutsk Oblast, where fires have been the strongest during the last month, a state of emergency was introduced. It is said that such a tragedy can cause permanent environmental and climate changes. Despite this, the inactivity of the fire fighting services was stopped only now, at the behest of the Russian president. Why and what will result from this?

What does the government do when the country is on fire?

According to Greenpeace Russia, fires in Siberia have already taken 4.5 million hectares of land. However, some sources say that since the beginning of the year, 13 million hectares of Siberian forests have been consumed, of which seven in the last two months. Why, then, did the services not move before the fires in Siberia reached such monstrous areas? It’s mainly about the local law and profits and loss estimation. Fires in this part of the world are a widespread phenomenon, which is why the Russian government doesn’t always take action with the first flames. One must first consider whether such a move pays off. The law allows not to take action if the potential damage isn’t significant and preventing it generates too high costs.

This time, however, stagnation in anticipation of spontaneous putting out of burning forests didn’t work. Firefighters and the army, at the behest of Vladimir Putin, started to work only recently. 10 aircrafts and 10 helicopters were sent to fight the fire. 3.7 thousand people take part in the action. It’s still not much considering the area that requires intervention. According to the Federal Agency for Forestry, only a few percent of burning areas are extinguished.

Weather forecasts also don’t favour preventing the tragedy’s progression. According to meteorologists, there is not much hope for rain in the coming days. In turn, we can expect strong winds, which only favor the spread of fire and make it difficult for firefighters to extinguish it.

Speaking of firefighters, nine of them were tragically killed while putting out the fire. However, it’s not only them who are exposed to the consequences of dusts and harmful gases emitted by burning forests. The smoke spreading over huge distances causes a significant deterioration of air quality, including cities. Such a drastic increase in the amount of smog can have deplorable effects on the health of their residents.

Some argue that the effects of the fires in Siberia will be felt long after they cease. The problem, however, is not so much the forests as the burning peatlands. The coal deposits there emit huge amounts of carbon dioxide, which will definitely leave a mark. A similar situation took place in 1997 in Borneo, when peatlands dried for oil palm cultivation flared up. At that time, 13-40% of the annual CO2 emissions from the burning of fossil fuels leaked into the atmosphere. A large number of people had to be hospitalized. The replay of this tragedy took place only four years ago. It is worth noting that the areas covered by fires on the Asian island were much smaller than those in Siberia. 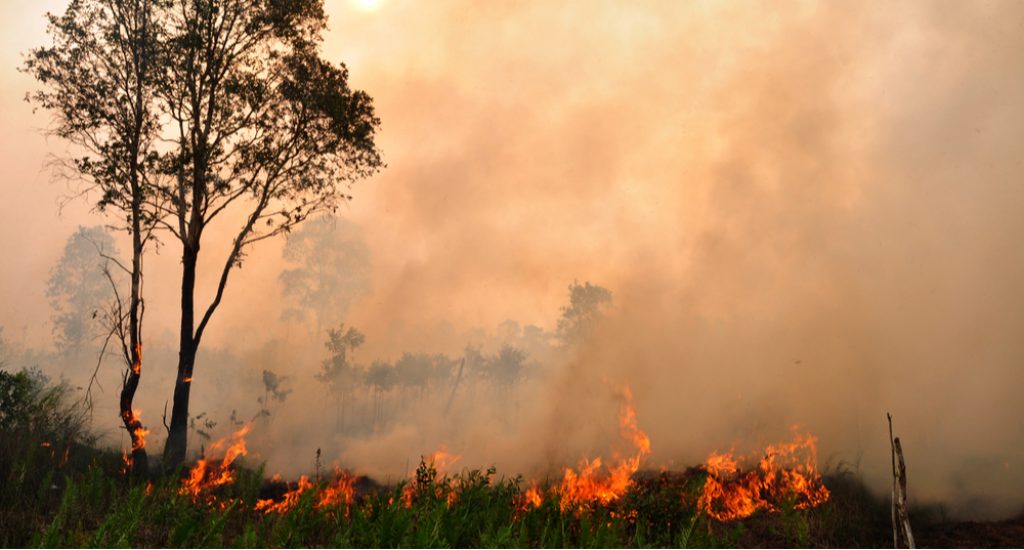 Fires in Siberia are (not exactly) natural

Let’s say this again – fires in Siberia (and not only), huge tracts of burning forests and peatlands are nothing new. In times of drought, one lightning strike is enough to lead to a tragedy. This year, however, forests are extremely vulnerable to the spread of fire. Reported temperatures are several degrees higher than average temperatures over the past thirty years. A few degrees is not much, but enough to dry out vegetation and soil, and thus significantly increase the risk of fires.

Peatlands, however, wouldn’t be so susceptible to ignition, if it weren’t for the melioration leading to their drying. Of course, this is not the main reason for the residual water disappearance. The process of thawing ice layers in the soil, which kept water on the surface, is also responsible. Now that the soil is permeable, water soaks into it easily, leaving the surface dry and flammable.

It is not known, however, to what extent the ignition was caused by natural phenomena, and how much human activity. However, the authorities of the areas most affected by fires in Siberia point out that people have had quite a part in causing the disaster. Especially those who throw cigarette butts from cars to the sides of the roads.

Fires in Siberia are a terrifying force of nature. However, Russia is not isolated. Similar phenomena, although on a slightly smaller scale, are now taking place in Alaska, Greenland and Canada. Scientists are alarming that we should get used to the more frequent tragedies of this type. It is, as they say, a self-perpetuating process. Huge amounts of carbon dioxide released into the atmosphere will surely not remain indifferent to climate change. It will indirectly, along with huge amounts of dust, allow better heat retaining in the atmosphere and, therefore, increase the temperature on Earth. Tragical events like fires on Siberia can be expected more and more often in the following years. Unfortunately, they threaten the entire earth – plants, animals and human health.