Home » ecology » Fires in Amazonia – what is going on and what can we do?
ecology

Fires in Amazonia – what is going on and what can we do?

The ecological theme of this year is undeniably fire. Fires. In Alaska, Siberia, all over the world. However, the real hell in the world media only began when Brazil, Bolivia and Venezuela (together with other South American countries) caught fire. Why? After all, fires in Amazonia are nothing new. The tragedy (which the burning Amazon undoubtedly is) occurs in rainforests – both in Asia, as well as in Africa and South America – every year. The problem is that this year’s, although not the largest in history, break records from recent years. In addition, burning these incredibly valuable areas isn’t the fault of chance or natural forces. Amazonian forests are being burnt to free up space for cattle grazing and soybean cultivation. What is going on and who allows it to happen?

Is it really that bad this year?

According to official data [1] published on a regular basis by the Brazilian National Space Research Institute (INPE), so far almost 92 thousand ignitions have been detected. In Brazil alone, in 2019. Compared to last year, this is an increase of 67% (and the firing season is not over yet). Indeed, in the years of 2002–2011 the number of detected outbreaks was up to 151,000 a year, but in no way can it justify the recurrence of the harmful trend. The more that the wild Amazon rainforest is smaller every year – and carbon dioxide, which requires sequestration, only increases. Yes, the situation really looks bad.

When talking about Amazonia, however, you can’t limit yourself to forests located in Brazil (although that’s where 60% of it is located). Bolivia has a slightly smaller problem – 76% more fires broke out this year than the year before. However, it is still a number four times smaller than the one in Brazil.

Fires in Amazonia is not the end of the story

On the other hand, when talking about Brazil, one should also take into account other biomes occurring in its area. To say that the only problem is aout fires in Amazonia is a big understatement. In fact, the outbreaks in this part of Brazil are just over half of all flares observed from space stations. Cerrado, the Brazilian-Paraguayan savannah (followed by Mata Atlantica) is second. Experts from the Amazon Environmental Research Institute (IPAM) even say that the most endangered biom in Brazil today is Cerrado, not Amazonia [2]. 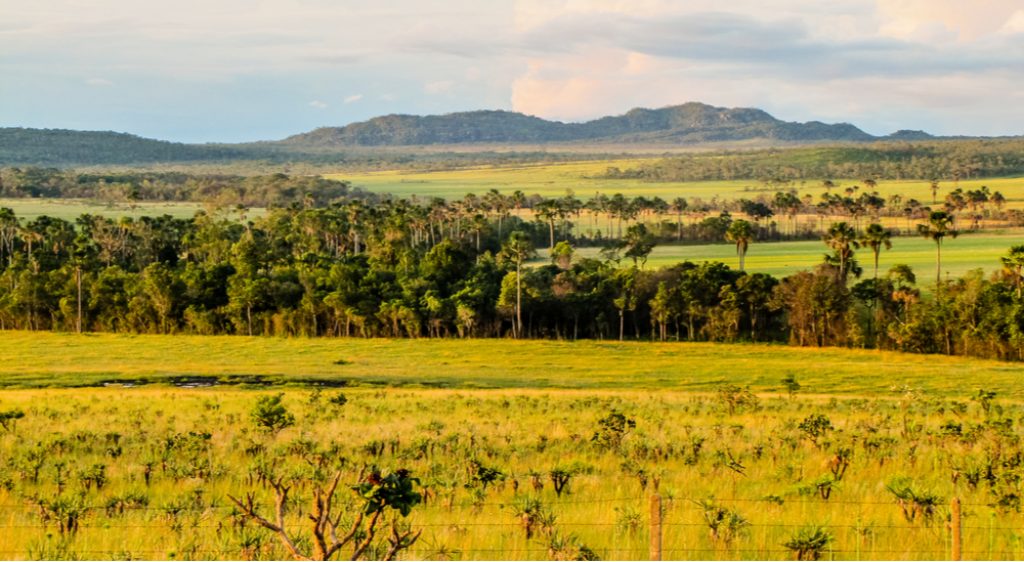 Although deforestation in this area has been losing on intensity for several years now, the area of forests cut out is equal to that in Amazon rainforest. The only difference is that Cerrado is almost half the size. Nevertheless, the situation in both these regions is frightening and dangerous.

The source of the problem isn’t a wild cataclysm or drought that affects South America every year, but more and more invasive human activity. Fire in rainforests is unlikely to be a natural phenomenon (although it can happen). In addition, the humidity level in Brazil is much higher than the average from the previous three years [3], and the fire is raging at its best. Why? Well, because fires in the Amazonia are being set up to clean the area after forest logging. Of course, this isn’t the only reason, but this type of fires usually get out of control and – under favorable conditions, such as (extremely) dry season – “run wild” and attack the forests not yet cut down. The fire that burns in secret below the lush tree canopy is difficult to detect and deadly to both animals and plants.

During one year, Amazonia has lost around 18,000 km2 of rainforest [4]. In August alone, over a thousand square kilometers of Amazonian forests were cut (and then set on fire) [4]. This area is equal to the area of ​​Hong Kong. Therefore, the reasonable question seems to be: who allows all this? 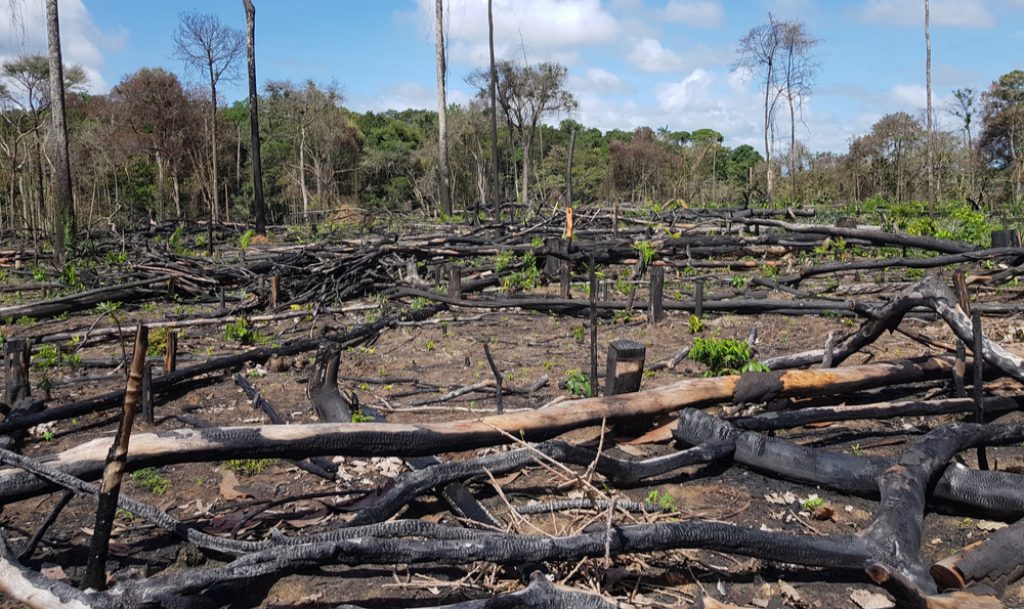 Some (and even the majority of people and media taking on this topic) blame Brazil’s policy for increased deforestation and fires in the Amazon. The accusations are directed in particular at the new president, Jair Bolsonaro. Since last year, when he took this position, deforestation, and therefore also fires, have increased significantly. The enforcement of penalties for illegal logging, in turn, has weakened considerably. All this begins to make sense if we take into account the promises of the president himself, who freely speaks of opening the Amazon rainforest to agriculture on an industrial scale and withdrawing some restrictions on the use of the natural environment [6].

Bolsonaro’s ignorance doesn’t end there – he loudly calls scientific alerts and satellite data a lie. The director of the aforementioned INPE institute was dismissed after a dispute with the president, who didn’t believe in his data on deforestation [7]. During his rule, 21 of the 27 superintendents of the Brazilian Institute of the Environment and Natural Renewable Resources (the so-called IBAMA), which is the organization that maintains order in the Amazonian forests, were dismissed. As you might guess, most vacancies are still there. Of course, the whole truth about the new president’s policy is not available to us, but the numbers seem to speak for themselves. It seems that many years of efforts to protect the Amazon rainforest have fallen a bit this year.

Human and planet’s health in question

With this amount of smoke in the Brazilian air, sooner or later human health will also sprinkle. Some cities have been covered in dark clouds for many days, and the amount of dust in the air far exceeds the level considered safe. This state of affairs will undoubtedly affect the condition of the respiratory tract of inhabitants of contaminated areas – and more.

The rainforests in this part of the world are called ‘lungs of the earth’ because they absorb huge amounts of carbon dioxide. However, the name begins to take on a new meaning – just like animal lungs, instead of producing oxygen, burning trees begin to “exhale” carbon dioxide. Fires in Amazonia on such a large scale can significantly contribute to the climate catastrophe, which it should be mitigating. At this stage, it’s no longer a problem only in Brazil, but in the whole world, which will undoubtedly experience consequences of such reckless actions one day.

Fires in Amazonia have caused a great deal of emotions among concerned people around the world. Although Brazil may seem distant to many of us, the truth is that it’s us and our choices that influence the future of the rainforest. We’re talking here about refraining from buying palm oil grown in Asia, as well as beef from animals grazing in Brazilian, cut and burned tropical forests. This is one of the two main reasons for deforestation in the Amazonia. The second is the cultivation of soybeans sold as feed for farm animals. 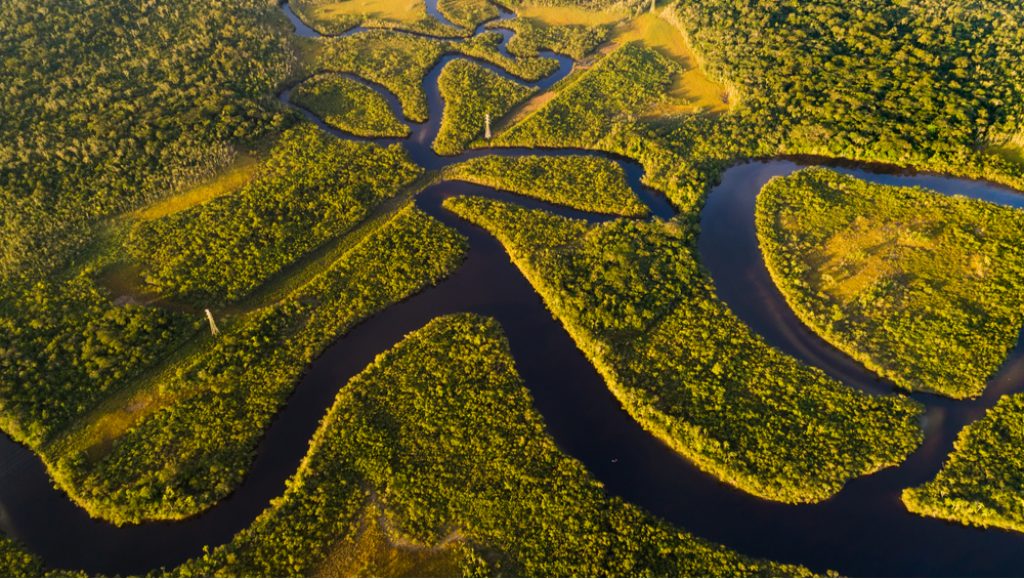 Unfortunately – it’s not enough to restrain from buy Brazilian meat. Soybeans from Amazonian crops are exported all over the world, so the European beef may also be indirectly guilty of the devastation of the Amazon basin forests. The best ecological solution in this situation is to stop, or at least reduce, meat consumption. Let’s not get carried away – we can eat soybeans, at least in Europe, with our minds at peace. The one that goes to animal feed (i.e. the one that is often grown in Brazil) is genetically modified, and as such is not allowed for human consumption in Europe. Plant-based diet is therefore the most environmentally responsible food choice. It’s also the easiest thing we can do for Amazon rainforests’ health. It’s not enough to just “pray” for Amazonia, at this stage we need to take real action.

Eco-friendly contraception, which one is the best?