Is coffee ecological? Is it ethical? Let’s take a closer look

While drinking morning coffee, hardly anyone wonders what path it had to travel to reach our homes, cafes and workplaces. However, if we want to live ethically and limit the negative impact on the planet – it is worth devoting a moment to this issue. Is coffee ecological and ethical? Not really. The coffee industry has several dark sides. Coffee empowers and makes millions of privileged consumers happy, but ignores those who provide it. In addition, this unique plant may be good for human health, but not necessarily for Earth.

How is coffee cultivated in the 21st century?

If you want to know the fate of coffee from the beginning, you should start from its cultivation. This strange plant, without which today’s world can’t live, has evolved hiding and shade. Literally. It originally grew in the underbush of African jungles. This is the way coffee had been cultivated for the first few hundred years – in the shadow of natural forests. As demand increased, inefficient practices had to be slightly modernized. Coffee monocultures grown without shade, in full sun (so-called sun-cultivated coffee) began to appear more and more often. Untill they became a common practise.

In order to cope with modern competition, plantation owners were forced to cut down trees, banish animals and invite open sunlight. Lack of small animals that naturally limit the number of insects, as well as the greater susceptibility of monocultures to attacks of diseases and insects, have to be compensated with poisonous pesticides. In huge quantities. Considering that coffee is the second most desirable commodity in the world (right after oil), the scale of destruction caused by modern, monocultural and ‘solar’ crops is very large. Is coffee ecological when cultivated modern way? No way.

Coffee cultivation is, along with plants such as soybeans and corn, one of the main causes of deforestation in many countries. In Brazil, for example, Mata Atlantica, a rainforest slightly less popular than the Amazon, has lost 95% of its area over the past 500 years [1]. From over a million square kilometers, 50,000 remained. For the cultivation of coffee and cattle grazing. Today, the area is protected and inscribed on the UNESCO World Heritage List, but the loss of biodiversity is indescribable. These, today residual, forests characterize (or rather: characterized) by even greater abundance of life than the Amazon Forest and are home to at least several dozen endemic, endangered species.

According to some estimates covering the whole world, one cup of coffee is responsible for about 6.5 cm2 of rainforest damage [2]. An additional problem is the fact that one area can be used for growing coffee for about 20 years [1]. After this period – if coffee is grown in an unsustainable way – the soil erodes, becomes sterile and unusable. Crops are planted in new places – and the whole process begins again.

Farmers who grow the coffee are not exactly the ones to blame fo it. This is, to a large extent, a matter of policy imposed by major coffee importers such as Costa or Starbucks. Unfortunately, the complex supply chain is not always beneficial for the farmers themselves. It is believed that plantators, on average, receive a salary of 10% of the final price of coffee. An additional threat for small producers is also increasing competitiveness and falling prices on the coffee market. As a result, most growers are left without any financial security, a safety margin in the event of, for example, adverse weather conditions. As you probably know, wherever producers are exploited for a fraction of what is earned thanks to them, working conditions also leave a lot to be desired.

Fortunately, this isn’t a problem that global brands can afford to ignore. That is why, in an atmosphere of growing awareness of social and ecological problems, cafes around the world buy certified coffees. In the case of human rights, it will be a Fairtrade certificate, in the case of ecology – Rainforest Alliance.

Is coffee ecological and ethical when certified?

Perhaps for convenience, or perhaps because of the distrust characteristic for people, we used to approach certificates with a great deal of reserve. However, the (credible!) truth is, certification can change a lot (we recommend an interesting case study). For example, Fairtrade certification ensures transparency of the supply chain and allows you to reach the plantator himself. It also provides better pay and a fixed minimum buying-in prize, thus enabling farmers to achieve stability. In addition to fighting poverty, Fairtrade also helps growers by organizing trainings or, for example, enabling access to health care.

The second most popular coffee certificate is Rainforest Alliance. This, in turn, focuses on the protection of rainforests and their biodiversity. To obtain it, growers must stick to guidelines, including those established by the Sustainable Agricultural Network (SAN). Such guidelines prohibit, for example, deforestation – and even require afforestation of wasteland. Rainforest Alliance also actively encourages cultivation of coffee traditional way, in the shade.

Of course, certificates have their minuses, mishaps and shortcomings. They are not an ideal and final solution. However, this is a big step in the right direction.

How you prepare your coffee matters! 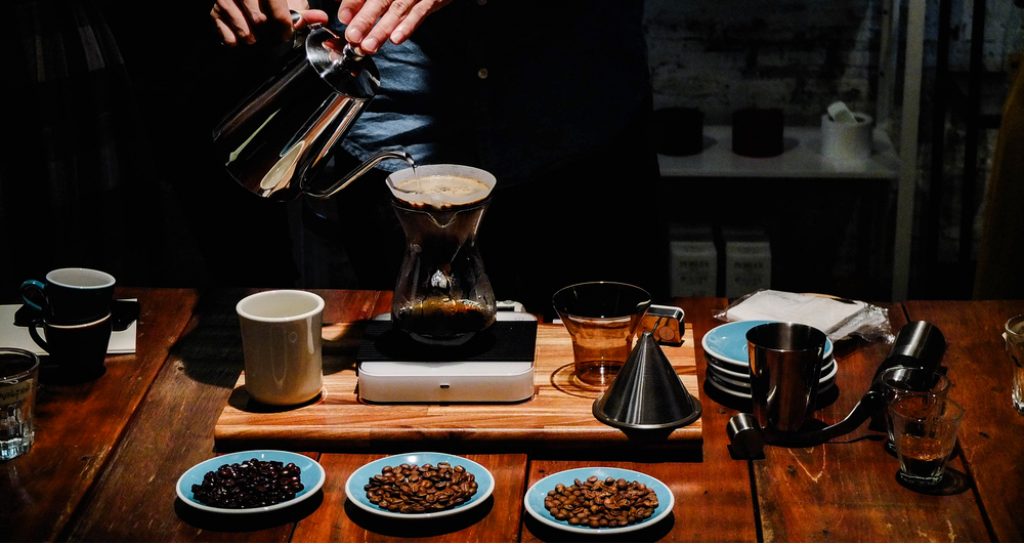 Responsible consumerism and buying coffee from a reliable source is very important, but that’s not all. Indeed, coffee production leaves the biggest ecological footprint, but the second most important aspect is what we do with coffee in our homes (or cafes) [3]. Surprisingly, transport and packaging are far behind (even when it comes to CO2 emissions). A German study on the subject [4] suggests that activities directly related to the preparation of coffee are responsible for 30% of emissions from the entire coffee industry. That is why it’s really important how we brew our coffee. It all depends on the energy consumption – so the coffee machines, both classic and capsule ones, are the worst (although in the case of the latter there is still the problem of producing large amounts of garbage). The least emission, and therefore the most environmentally friendly, are French Press devices (piston type) and overflow brewers.

Therefore, we do not urge you to completely abandon coffee (although it does not hurt to limit it somewhat), but only to responsible consumerism. Let’s not be afraid of certificates and – if possible – reduce energy consumption. We guarantee that coffee consistent with your beliefs tastes the best!