Light pollution, alongside the development of human habitats, is becoming an increasingly serious ecological threat. Such a huge amount of artificial light that we emit at night – especially in and around cities – is extremely dangerous to biodiversity. The presence of artificial light after dark distorts the ‘biological clock’ of numerous organisms and negatively affects noctural animals which only begin to be active in the night darkness. Light pollution particularly strongly affects creatures extremely important in almost every trophic network – insects. Scientists are alarming that it is one of the causes of the ‘insect apocalypse’.

Light pollution – what is it?

Have you ever wondered why it’s hard to watch the stars in the city, even on a cloudless night? Contrary to appearances, it’s not always the fault of smog (at least not the one caused by exhaust fumes). Light pollution and the resulting skyglow is responsible for this.

Artificial light at night (ALAN), define as environmental pollution, is the light emitted by man. This category includes not only local light sources (e.g. street lamps). It’s also light scattered in the atmosphere over cities (so-called skyglow), car headlights and even gas torches associated with oil extraction [1]. Along with the agglomerations expansion, fragmentation of the wilderness with illuminated roads and broadly understood expansion of man in general, light pollution is becoming a pervasive problem. As far as we know, as soon as in 2014, the night sky had unnaturally high level of brightness over almost a quarter of the Earth’s terrestrial surface [1]. 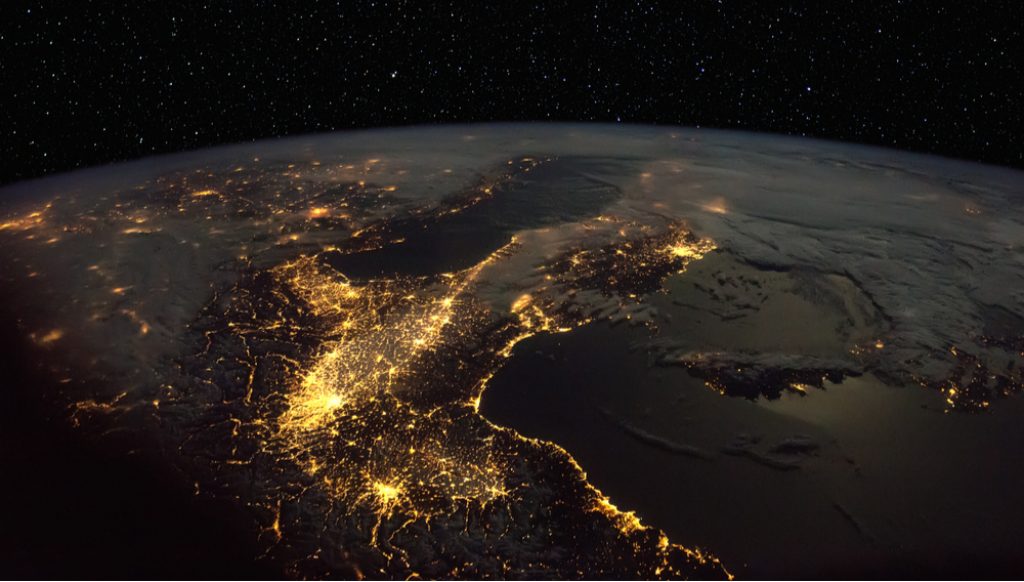 This is a very dangerous situation for insects (although not only for them). The harmfulness of this type of pollution is clearly demonstrated by the fact that light has long been used to control insect populations. Light traps are nothing more than effective decoys that attract insects and kill them by electric shock.

Light is necessary for insects – but it is harmful in excess

Some insects move towards the light source due to biological adaptation. Once they reach such a place, they rarely manage to free themselves from the light trap.

However, the decrease in the number of insects is not only associated with a direct “lethal” beam of light. In addition to insects that cannot escape from the blinding glare and die from the heat, exhaustion or fall easy prey to predators, there are a number of natural situations that are disturbed by light pollution [1]. 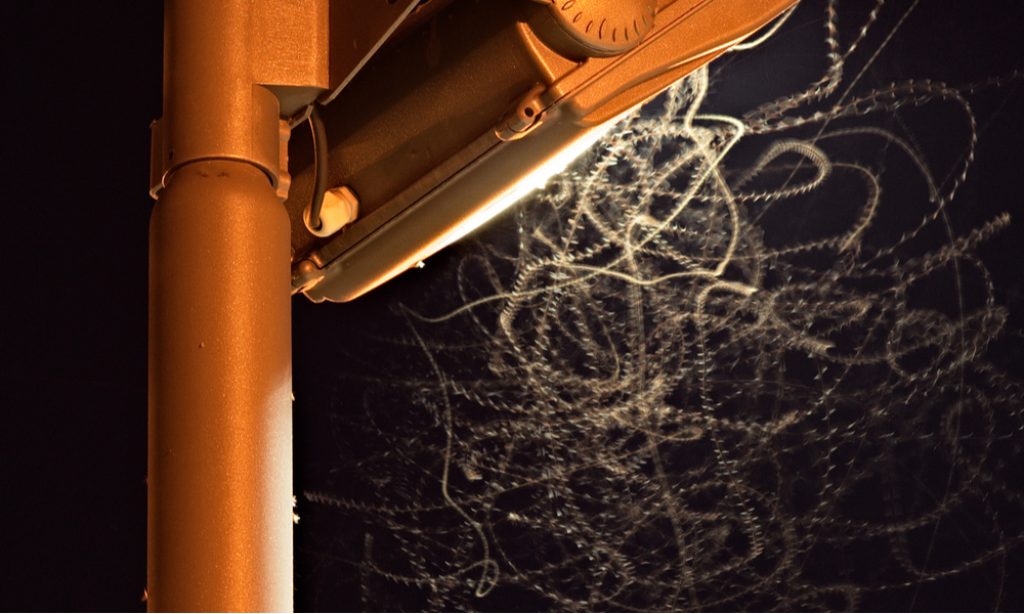 Reproductive cycle of many insect species depends on the presence of a specific amount of light. For example, corn earworm (Helicoverpa zea) will not breed if its closest surroundings are illuminated by more light than exactly that reflected by half the moon’s disk. Many species have such sensitivity. Light pollution also confuses insects that rely on light signals to find a reproductive partner. It is best observed in tiny beetles called fireflies. These animals exchange bioluminescent signals, which may simply be unnoticed or less often sent in the presence of artificial light sources [2]. 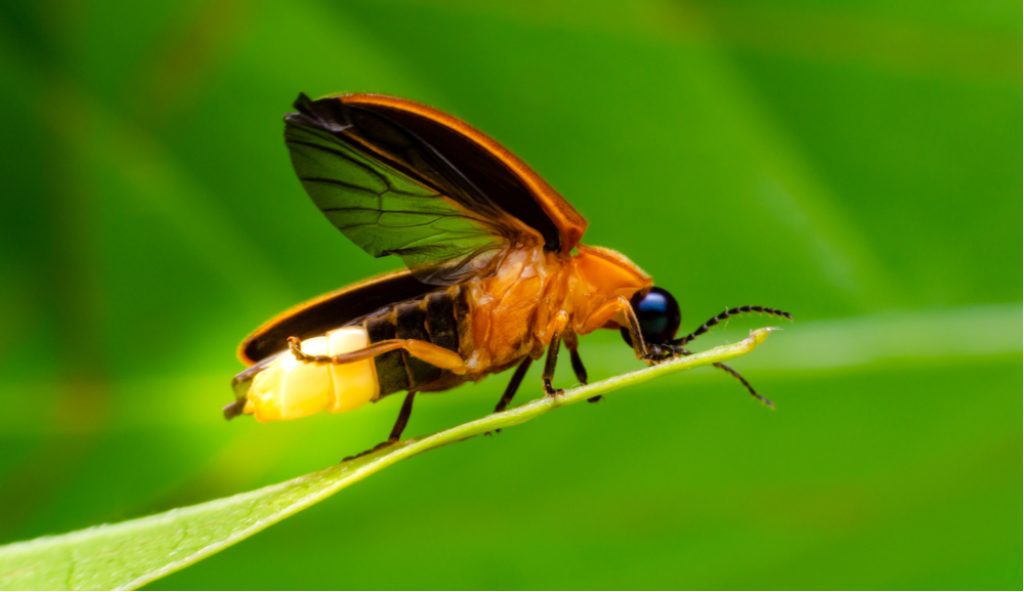 In turn, insects relying on polarized light to identify water (water reflects light polarizing it at the same time) accidentally crash into windows and cars. Intending to lay eggs in water, instead of it they often find an object that can also polarize intense, artificial light.

However, that’s not all – light affects the physiology of insects. Exposure to light pollution may deprive some species of the ability to produce gametes or sex hormones, and even block the production of pheromones. What’s more, in some species only one gender tends to fall into light traps (e.g. at streetlights), which prevents the other from finding a mate.

Light pollution also has a significant impact on insects’ migration – both daily and seasonal. Those species that exhibit phototactic behavior (move in relation to light, both to and from it), have evolutionarily adapted to rely on the natural light cycle. Insects that become active at night and move only in the soft light of stars and the moon, suddenly hit the light barriers in the form of street lamps. Such barriers may prove insurmountable, limiting or fragmenting the habitats of sensitive insects.

Some species, e.g. dung beetle, use stars to navigate. Others, such as wasps and dragonflies, maintain a horizontal position during flight by keeping the illuminated part of the field of view above their heads. Some insects, moving at night, are heading exactly where the moon is moving. This is how e.g. the beach sand hopper (Talitrus saltator) behaves. Light pollution simply “blinds” natural navigational sygnals and prevents animals from functioning properly. 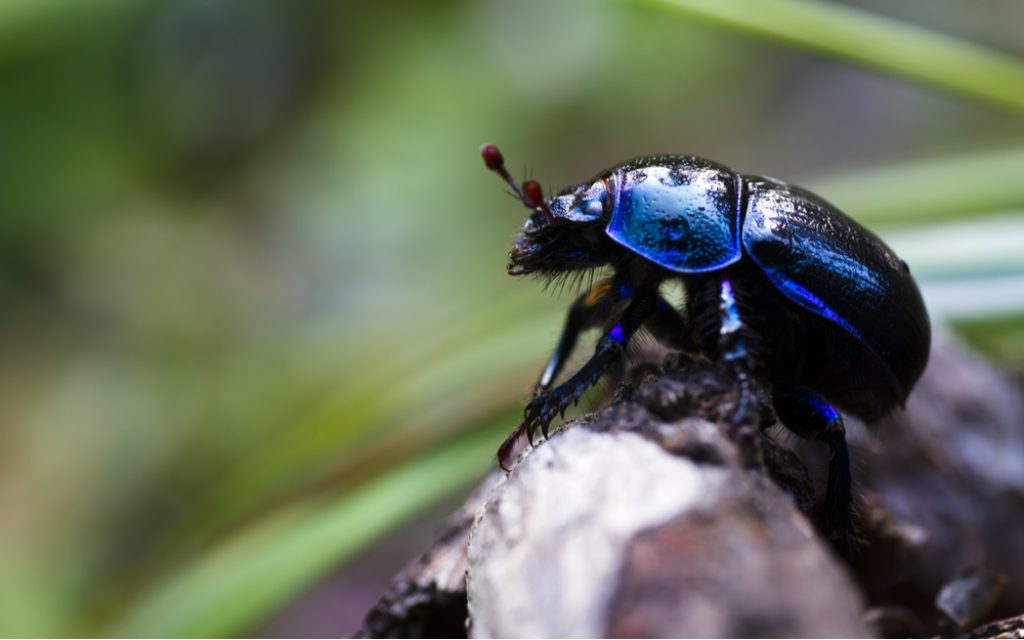 There’s also a problem with lightning around water reservoirs. Some insects related to the river environment cease to colonize other streams in the presence of light. Such a disorder, in turn, has a number of consequences for the rest of the trophic network – e.g., for aquatic organisms that feed on insect larvae.

On the other hand, light pollution makes hunting easier for many insectivorous animals. Predatory arthropods, such as spiders, benefit most from insects orbiting the light source. Indeed, it’s impossible not to notice that they Fancy lanterns and outdoor lighting in particular. Birds, amphibians, reptiles and insectivorous mammals also have an easier task in obtaining food. It doesn’t sound like a tragedy, right?

Unfortunately, quite the opposite. Increased predation pressure is favourable for its beneficiaries only in the short term. Insects do not seem to cope with new threats. Their populations are not recovering, but gradually decreasing [3].

The decrease in the number of insects, often being the food base of other animals, is also caused by the fact that they cannot get food themselves. Many species avoid feeding in the direct presence of light due to the increased likelihood of predation. Therefore, they rely on niches of darkness which are less and less accessible and in which competition is growing.

Some species of moths, what have been proven in the laboratory, even reduce the frequency of feeding if we introduce light pollution into their environment. The consequence of this is, in turn, weaker growth and less reproductive success of these animals. Bioluminescent larvae of organisms living in caves, in the presence of artificial lighting, stop consuming food at all.

Light pollution indirectly affects plants as well. Modifications to their structures caused by light cycle disturbances – again – prevent some larvae from feeding. This, like all the insect tragedies mentioned earlier, can lead to a trophic cascade (partial breakdown of the interrelationship network between organisms). Finally, the consequences will undoubtedly affect us, humans, as well.

Light is commonly used in agriculture, as – so far thought – a not harmful form of protecting crops against insects. As you can see, nothing is without consequences. Light pollution near plantations, especially ecological ones, threatens both insects and the plantations themselves.

In the case of monocultural agriculture and slightly more traditional cultivation that benefit more from ecosystem services, the decline in insects numbers will undoubtedly be felt (or already is). The diversity of insects in agroecosystems indirectly provide natural protection against pests, effective pollination of plants or seed spread, preservation of soil structure and fertility, and proper circulation of nutrients [4]. 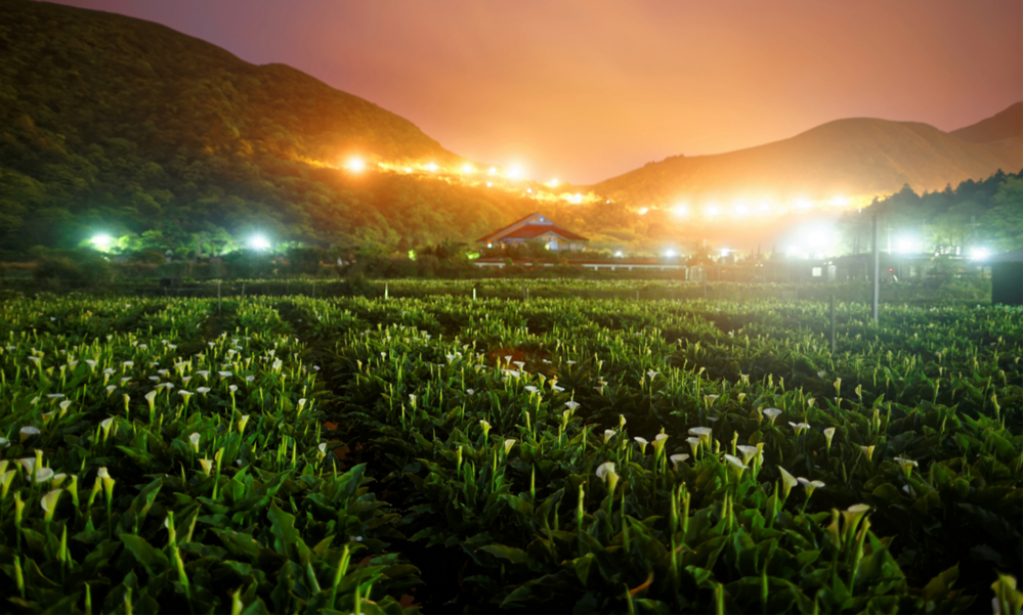 Even agricultural areas heavily changed by man depend on ecosystem services to some extent. Light pollution can disturb them at the very base – even affecting the behavior of night pollinating insects. It turns out that in the presence of light, some pollinating moths are so confused that they fly high above the plants to which they should reach. Night-time light pollution can cause a decrease in ‘visits’ of pollinators by up to 62%, which in turn causes a yield lower by 13% (in the case of thistles) [4]. Such a result is not difficult to be extrapolated to other crops, although scientific research in this area is scarce.

How can we mitigate light pollution?

Undoubtedly, for the stability of natural ecosystems, agroecosystems and human well-being, biodiversity is key. So how can we limit the negative impact of light on its insect co-creators? Fortunately, light pollution is quite easy to control [5]. 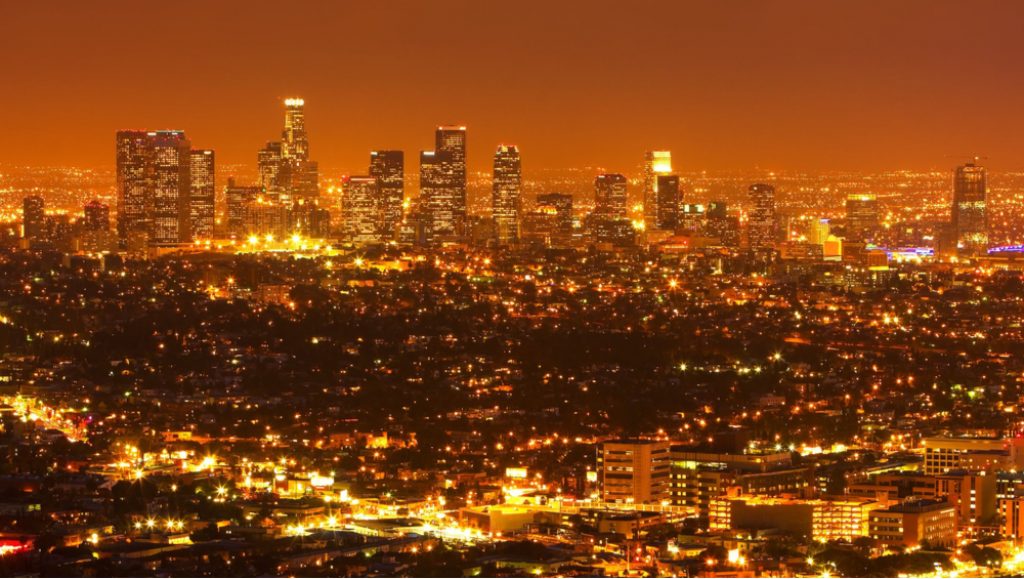 To protect areas free from light pollution, the so-called dark-sky preserves (DSP) are being created. Unfortunately, only in these few places on Earth do ecosystems function intact day and night.

Light pollution isn’t the only one out there killing insects

Research indicates that the decline in insects in the world is so rapid that within a few decades we can expect the extinction of about 40% of the species known to us today [3]. Light pollution as a reason for this is only the tip of the iceberg. Scientists mention several other, probably even more important reasons for the extinction of insects [3]. The first place is occupied by loss of habitat, intensification of agriculture and urbanization (including, among many others, light pollution). Modernization of agriculture, in turn, comes down to probably the worst, direct reason for decimating these animals – poisoning with pesticides. Anthropogenic climate change, and thus also foreign pathogens and species, pose a slightly smaller threat. 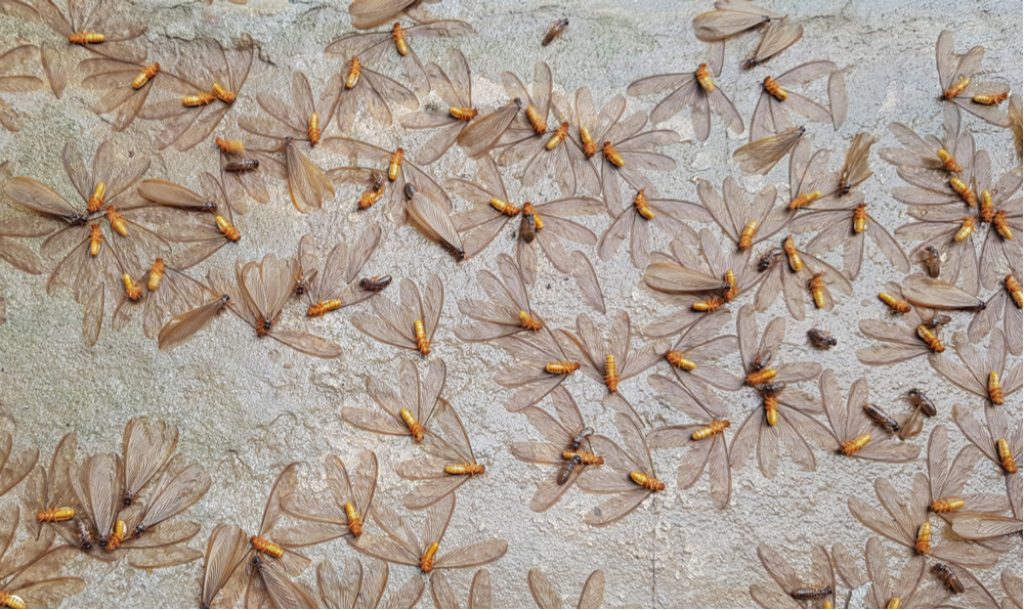 It seems that all the causes of the ‘insect apocalypse’ have their source in unbalanced human activity. There are simple solutions to many problems, but their implementation seems very problematic, sometimes for systemic (and sometimes unknown) reasons. Although it’s hard to believe, maybe the stake is still not enough? If so, when will it be? Let’s hope it won’t be too late.

Indoor compost bin - is it a good idea?