Along with environmental pollution, intensification of agriculture and changes in eating habits, it’s increasingly difficult for us to provide the body with valuable nutrients in the right amounts. Malnutrition applies both to the “global North” and developing countries (for completely different reasons, but let’s leave social issues aside today). In response to the need to provide valuable and healthy food at a low cost and without a complicated supply chain, the idea of ​​microgreens was born. What are microgreens and why can they be a great dietary supplement?

Let’s start, however, by explaining what microgreens are. It’s actually not complicated at all – microgreens are simply seedlings of vegetables and herbs. Seedlings, on the other hand, can be described as very young plants with developing cotyledons and (usually) the first leaf [1]. Microgreens resemble sprouts a bit, but they differ a bit. However, the line between them is quite thin. Microgreens are harvested and consumed when about 2-3 weeks old, while the sprouts are ready to eat only a few days after sowing. This is also the reason why sprouting doesn’t require a substrate while microgreens do. Therefore, unlike sprouts, they should be cut above the soil and eaten without roots.

Keeping plants in the ground for a longer time allows them to gain more flavor and aroma (often characteristic for mature plants). Due to the fact that we grow them in the ground, we have a larger selection of seeds for potential microgreens than for sprouts. What plants are suitable for microgens? All edible vegetables, herbs and flowers. 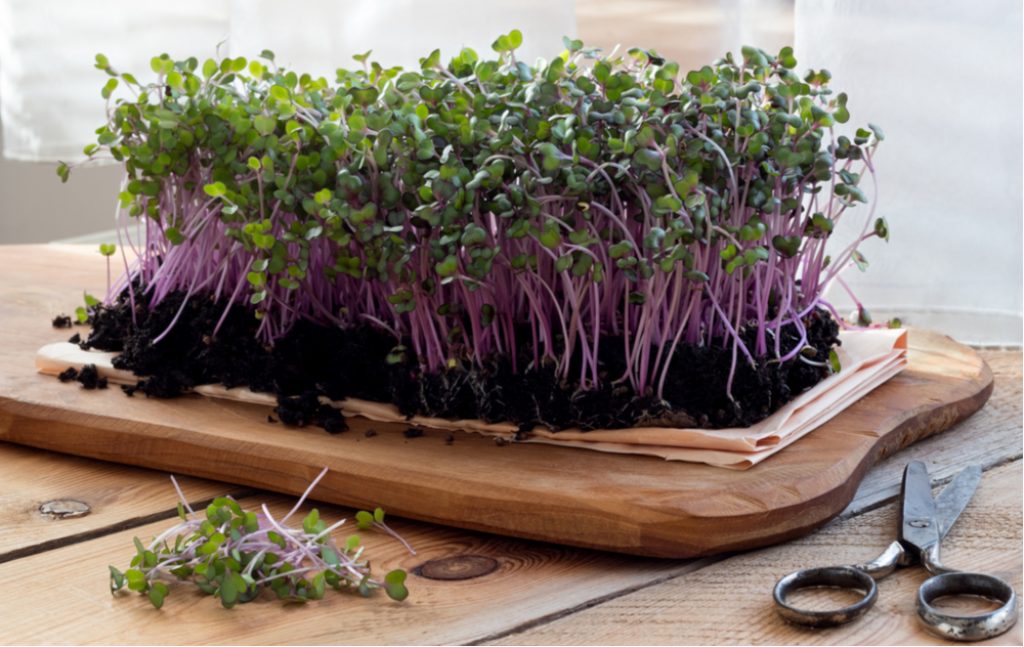 All international and national nutrition organizations describe vegetables as the most important component of human diet. Despite this, the consumption of recommended amounts of fresh vegetables is usually smaller than it should be [2]. Microgreens, although tiny, contain large amounts of exactly the functional ingredients that we are looking for in plants. We’re talking about vitamins, minerals, and antioxidants. It turns out that compared to the concentrations of these components in mature leaves (as well as other parts), cotyledons of young plants are characterized by higher nutritional density [2] [3]. Thanks to this, smaller amounts of microgreens can provide similar nutritional effects as larger amounts of ripe vegetables [3].

However, not all microgreens will have the same nutritional value. The study conducted in 2014 [3] shows that the highest amounts of ascorbic acid (vitamin C), carotenoids, phylloquinone (vitamin K1) and tocopherols (vitamin E) have, respectively, red cabbage, coriander, amaranth and green radish. Microgreens of e.g. radish and sieve cabbage have very good bioavailability of antioxidants and minerals (such as potassium, magnesium and calcium) [4].

These inconspicuous, young plants certainly wouldn’t be so attractive, if it wasn’t for their taste. After two or three weeks of growing in the ground, microgreens can achieve the aroma and taste of ripe vegetables or herbs. These, in turn, can be very diverse. Some microgreens will be sweet, others bitter or spicy or even sour. The same is with their texture – we can choose from firm and crunchy, to soft and delicate.

Let’s face it, most of us also eat with our eyes. And microgreens are simply beautiful. Both as a dish decoration and as the main ingredient of the salad. They can be green, red or even purple. This, in turn, increases their attractiveness for children whose conviction to healthy vegetables can be difficult. 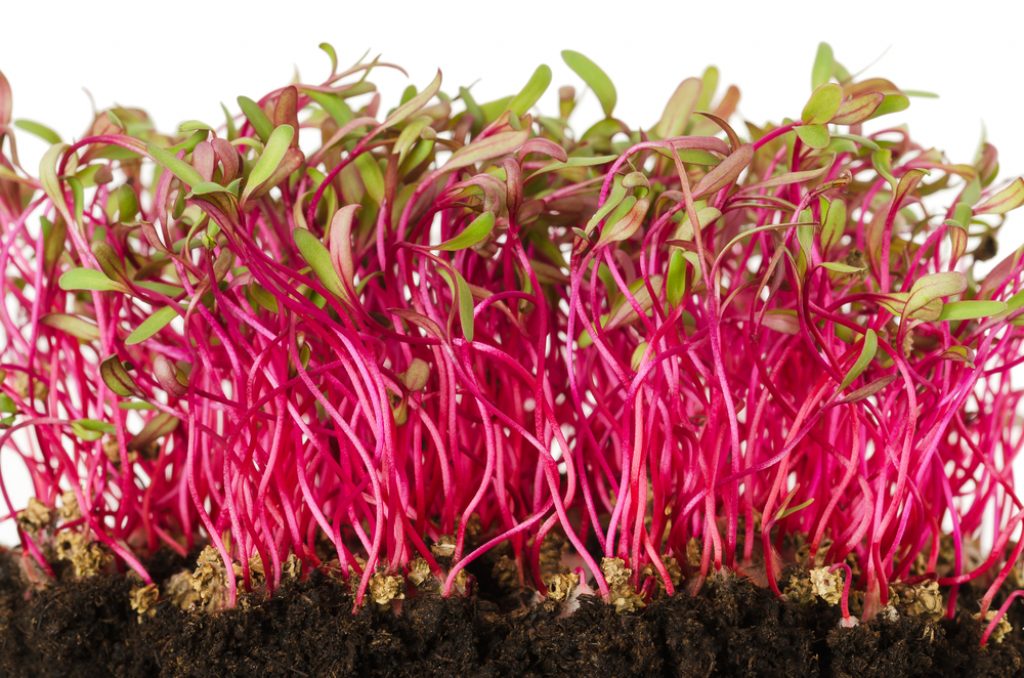 Opportunity but not a solution

Of course, microgreens cannot replace vegetables for us. Even by volume – no one will be satisfied after just a handful of overgrown sproutes. It is better to treat them as a natural supplement and diversification of a healthy diet rather than its substitute. Microgreens, however, give a little hope wherever communities are struggling with malnutrition (which isn’t synonymous with a lack of food) and the subsequent diseases. They take up little space and can be grown almost anywhere.

Let it not sound too naive – there is no remedy for all our civilization ills, and some issues require systemic changes. Many “global North” solutions are also unsuitable for implementation in developing countries. Growing microgreens requires some time, it’s also not entirely-free (although the financial contribution to their cultivation is relatively small). These and many other factors mean that the idea of ​​microgreens is still not widespread. However, even if new practices, such as microgreens, are only helpful locally – it is worth giving them a try.