Pilot whales in the Faroe Islands – slaughter or tradition?

Who are pilot whales, anyway? Well, they are extremely social and communicative marine mammals of the Delphinidae family. Their local populations even create their own specific dialects, which makes it easier for them to maintain their social structure and distinguish their group members from strangers [1]. However, despite highly developed cognitive and social skills, in some places on Earth, whale hunting is still legal and accepted. For example, Pilot whales in the Faroe Islands, with the permission of the authorities, are driven to shallows and massively killed every year. In the name of tradition, of course. Justifying such activities with the unavailability of goods for the archipelago separated from the mainland, has lost its relevancein in the 21st century Europe. Does this mean, however, that it’s appropriate for us to explain unnecessary slaughter by tradition?

Pilot whales in the Faroe Islands have been hunted since the days of the Vikings. According to official government sources [2], legal regulations regarding the use of cetaceans appeared on the islands as early as 1298. Indeed, in the 13th century hunting for these animals could have been necessary to keep the archipelago’s population healthy and prosperous. Eight centuries later, whale meat is no longer necessary for its inhabitants to survive. Moreover, a few years ago an official warning was issued against the consumption of Pilot whales’ meat. According to research [3], they are contaminated with large amounts of mercury, and their consumption affects human health and even fetal development. Today, the government, despite numerous objections from animal activists (with Sea Shepherd at the forefront), therefore protects this practice as part of the Faroese cultural tradition. Whaling is also referred to as pro-social activity. Due to joint action of fishermen and local communities, about 1,000 cetaceans are being killed there each year.

Although catching and killing cetaceans is prohibited in the European Union, this Atlantic Archipelago remains an exception. The Faroe Islands are Denmark’s dependent territory, but their government is autonomous. The country itself is not included in the Union, so it’s not a subject to its restrictions.

How are pilot whales hunted in the Faroe Islands?

Most (almost 70%) of pilot whales are killed in the period between July and September [2]. It is then that the most migrating cetaceans appear off the coast of the Faroe Islands. Fishermen who have noticed a group of whales rush them with their boats to the shallows. When animals get stuck in mud and are close enough, people waiting on land come with special hooks. They attach them to the pilot whale’s blowhole and pull it out to the shore. Residents equipped with special lances (so-called spinal lances) stab animals with them, aiming at the spine. The spinal cord is being broken and the animal dies within a few to several dozen seconds. Assuming, of course, that the hit will be well-aimed the first time. 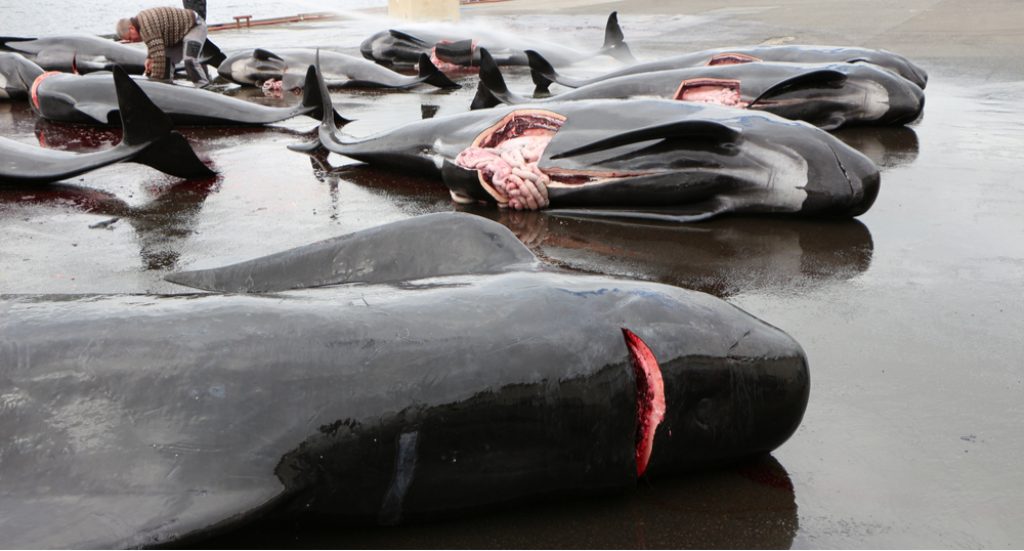 Then animals are being cut and left to bleed out. No wonder then that for most people raised without contact with whaling, this will be a drastic and emotionally difficult view. Highly social animals, killed side by side, struggling in the blood of the individuals they know (and possibly have bonds with) while waiting for their turn, are a difficult situation also for an observer. Whale proponents, however, point out that this isn’t more cruel than what is taking place at slaughterhouses. Well, it’s hard to disagree with it. Without valuing life as such, it’s worth noting that we are talking here about wild animals whose numbers are a contentious issue.

According to official statistics, 1,203 grindwals were killed in 2017 in the way described above. A year later, almost half less – 624.

Pilot whales are not an exception

These numbers, however, are a huge understatement. In addition to over a thousand pilot whales, in 2017 almost 500 Pacific white-sided dolphins lost their lives – about 250 of them in 2016. Every year, several bottlenose dolphins, Risso’s dolphins and bottlenose whales die during whale hunting. This is what official data suggest – it’s not entirely clear how many animals never enter the register, including those protected regardless of national law.

Moreover, even the status of whales than can be killed legally in the Faroe Islands is uncertain. Bottlenose whale, for example, is a relatively (compared to other cetaceans) species. Therefore, it’s not entirely known what their numbers are – and as a consequence, their protective status hasn’t been determined. Hunting them in such a situation is like playing roulette. Only for real.

Do whale proponents stretch the calculations?

Official Faroe Islands whaling website, whaling.fo, defends this practice by saying it’s sustainable. From what we can read on the site, the population of pilot whales in this part of the Atlantic is estimated at 778,000 individuals, and – on average – about 800 are killed each year. Unfortunately, the data cited by whalers comes from thirty years ago [4]. In addition, it relates to two species of the genus Globicephala: short- and long-finned pilot whales, without quantitative distinction. In the Faroe Islands, only long-finned pilot whales are hunted, so the potential impact on the size of local populations is much greater than whaling supporters suggest. According to the latest estimates [5], the largest estimated number of long-finned pilot whales in the North Atlantic after 2000 is just over 253 thousands. The smallest is 54,000 individuals.

The authors of the estimates themselves emphasise, however, that they are inaccurate, incomplete and require refinement. So how many long-finned pilot whales are there – it’s not known exactly. It seems that the defenders of this unethical tradition stumbled in the calculations or didn’t update their data insisting on those comfortable for them. Let’s hope that in a few years we won’t wake up with another species to be included on the list of those killed by man during the Sixth Mass Extinction.

Robert Downey Jr. wants to clean the Earth with A.I.

Celebrity environmentalists, or ecology in Hollywood