Shrimps and clams – the real cost of seafood

Although they’re not even closely fruits (as many languages used to call them), the small creatures drawn from the seas and oceans are witnessing growing popularity of foodies around the world. Animals such as shrimps and mussels (such as oysters) are often considered a healthy source of animal protein, an exclusive dish or a strong aphrodisiac. Unfortunately, reality – as it usually happens – is disappointing. Their consumption has not much to do with a healthy lifestyle, and catastrophic conquences of its ‘harvesting’ leaves a distinct moral and ecological disgust. What’s more – there is absolutely nothing sexy in this whole industry.

Plastic fruits from the sea

Let’s start with the health aspects sea creatures consumption – without going into nutrients and human metabolomics. The matter is simple – you know what a microplastic is? These are very small particles / fibers of plastics that are already present in every corner of the world, and an exceptionally big problem is precisely in rivers, seas and oceans. Because of their size, plastic particles are inadvertently eaten by fish and other sea creatures. In an even finer version, as so-called nanoplastic, they reach the digestive systems of small aquatic animals, such as shrimps and oysters.

These animals, being mostly filterers, are extremely susceptible to accidentally eating plastic particles. On average, in one clam, there may be more than 150 such molecules (although in farm animals there are clearly more of them than in those obtained from nature) [1]. In turn, in studies [2] carried out along the shores of Mediterranean Sea, it turned out that almost 40% of shrimps are loaded with plastic – among individuals living near Barcelona, ​​this value reached 100%.

As the most microplastics accumulate in the digestive system – in the case of oysters or shrimps, it is consumed by humans directly with the animal. It is estimated that enthusiasts of such plastic seafood can consume up to 11,000 micro- and nanoplastic particles per year. Although the long-term effects of such contact with artificial fibers are unknown, they are known to be the source of toxic substances, e.g. bisphenol A or aromatic hydrocarbons. Moreover, nanoplastics can be translocated to almost all internal organs [1]. It does not sound like the perfect scenario of healthy eating, right?

Marine farming (or aquaculture) of molluscs, such as oysters, may not only be unhealthy for humans, but also for surrounding ecosystems [3]. These creatures are “cultivated” (as defined by the industry) on a huge scale, because they are extremely profitable. Unfortunately, this scale is a problem. 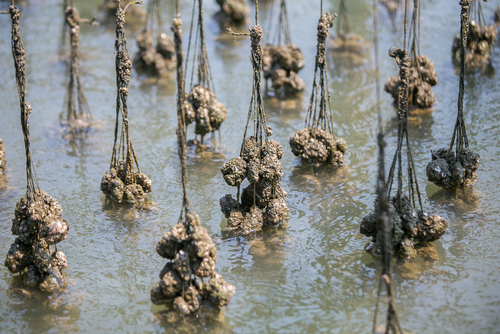 Oysters feed by filtration of water. One animal during the day can filter from 15 to 55 liters of sea water through its body, at the same time purifying it from phytoplankton and detritus (organic matter depositing on the bottom of tanks or floating in the water). These resources are extremely important in the marine environment because they form the fundamental base of the food chain. These are the resources for which wild animal species compete with large-scale farms. In this case, however, they have no chance. This results in a catastrophic loss of biodiversity.

Indeed, oyster cultures can enrich the seabed with nutrients, but at the same time enrich them with pollution. All this greatly disturbs the balance of benthic species. In addition, alien species, exotic, introduced for breeding, can transmit equally exotic diseases and parasites that threaten native populations. Such situation turned out to be a considerable problem, for example in Great Britain.

Wild drama with shrimps in the background

Shrimp farms are much more invasive. They were created and are constantly being created at the expense of natural habitats, which leads to a drastic loss of mangrove forests and salt marshes as well as many related ecosystem services. They disturb the balance of nutrients in the environment, and also pollute the surrounding waters by discharging untreated wastewater, often containing antibiotics, pesticides and fertilizers [4]. In this way, unfortunately, only half of the crustaceans, that are on the market, are obtained. 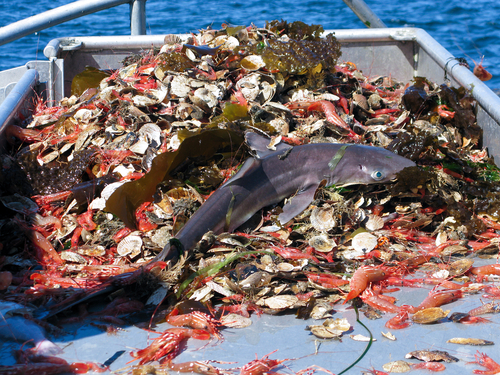 Yes, unfortunately – because aquaculture is nothing compared to obtaining the seafood from its natural environment. A real ecological drama takes place at the coasts of the seas and oceans exploited due to the fishing for wild shrimps. It takes place using the so-called bottom trawling, consisting of pulling huge, weighted nets on the sea bottom (similar practice applies to the molluscs as well – this is called ‘dredging‘). Such nets literally sweep everything in their path – including such valuable elements of ecosystems as seagrass assemblages, coral reefs and stone gardens, which provide a shelter for innumerable organisms [5].

However, the biggest problem associated with trawling is the so-called ‘bycatch‘. It is a collective term for all species of animals caught in the fishing nets unintentionally. These are both immature larval forms of fish, including those protected by law, as well as adults, mammals and sea turtles [6]. Part of the bycatch is thrown back into the sea (with a better or worse effect), but, unfortunately, some of the animals don’t have the luck to survive the confrontation with nets. The scale is huge – a study [7] on this subject conducted in the Persian Gulf showed that, by weight, for each shrimp catch, up to 44.63% was a bycatch. It may be significant that the surveyed catches were illegal – nevertheless, the problem exists and is also known perfectly well for legitimate shrimpers and international institutions. However, not much is changing in this respect. New fishing techniques are not developed (and the campaigns to limit shrimp consumption are being conducted). The only thing that is evolving are trawling nets – also, with poor results [6].

Huge problem on a small scale

The problem is not only with commercial fishing and large-scale shrimp farms, but also small private farms – both intensive and extensive. This issue is increasingly publicized in Asia, in particular in Bangladesh and Vietnam. Breeding of these crustaceans in Vietnam causes the discharge of huge amounts of pollutants directly into the Mekong River. This is also one of the main reasons for deforestation in this country.

Mangrove forests and most vegetation in their area  are also being massively cut out to adapt the space for shrimp breeding. This is particularly dangerous considering the low placing of Vietnam in relation to the constantly rising sea level – the vegetation along the coast is a kind of flood barrier that gradually disappears. This, together with the raising level of Mekong waters and its salinity increasing, poses a huge threat to rice cultivation in the river delta [8]. It is worth mentioning that 70% of rice exported from Vietnam comes exactly from this area.

The breeding of shrimps and molluscs, in its current form, is completely unbalanced and non-ecological. Indeed, for now it is profitable, but in a wider perspective it may prove tragic for the economies of countries dependent on – already so shaken – balance in nature. In the light of the threats that the seafood brings with respect to ours and our planet’s health, it is worth considering whether the poor quality and dubious effectiveness of aphrodisiac is really worth its real price.

Foodsi and Too Good To Go to fight food wasting