At the beginning of this year, a group of scientists from Norway and Switzerland, published an article [1] in which they presented a rather unusual idea for the use of renewable energy. Researchers have come up with what they called ‘solar methanol islands’. Such islands drifting in ocean waters would, using solar energy, bind carbon dioxide from water with hydrogen obtained at the station and produce methanol – a slightly more environmentally friendly alternative to commercial fuels, eg gasoline. Sounds pretty good, right? Indeed, at first glance.

Methanol production in solar islands would take place in two stages. Carbon dioxide, which we have been unable to cope with for years, would have to be extracted from the interface between water and atmosphere. In this way, the CO2 obtained would be subjected to reactions with H2, obtained as a result of electrolysis of hydrogen ions (present, of course, in water), powered by solar energy. Effect? Methanol obtained at the expense of a dangerous greenhouse gas, in a zero-emission way, with RES.

As the creators of the idea emphasize, the technologies used in potential solar islands are not new at all. Methanol as a fuel additive or fuel itself have been created in a synthetic way for many years now. Photovoltaic panels providing clean energy are also nothing new. It’s the combination of these two things that’s innovative here – as well as the addition of some unique details. solar islands would be located on the seas and oceans, and methanol produced by them would be transported ashore via ships.

Why are methanol islands a good idea?

Such drifting islands have many advantages. To produce methanol at dispersed stations, one do not need to supply raw materials because they’re collected on site. If methanol replaced commercial fuels, emissions from land transport would be limited to a very large extent (although the products of methanol combustion also contain a small amount of carbon dioxide). Electrolysis alone does not need energy from outside – the sunlight, in places where islands could potentially be placed, is enough.

what would coral reefs say about this?

Due to the deployment of solar methane islands, however, the first problem arises. Their creators assume their mooring especially along the coastlines of Australia, South America and South East Asia. Unfortunately, in these locations there are also the most valuable, from the perspective of biodiversity, water habitats in the world. It is there that the largest number of coral reefs is found. Such locations were not chosen by accident – there is also the most sufficient sunlight and relatively shallow (up to 600 m), calm waters which waves don’t exceed 7 m in height. Due to the demand for the same resources, such an artificial, predetermined “struggle for existence” may prove itself to be tragic for underwater life if the methanol islands are too close to the reef and limit the access of light. 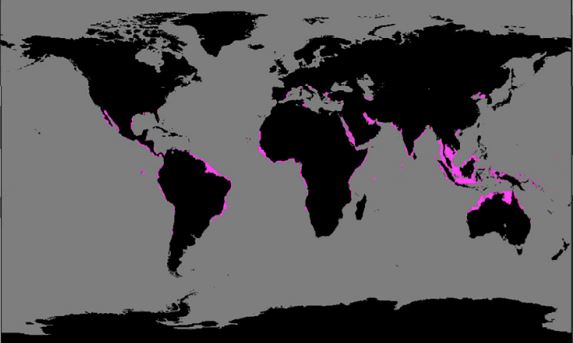 On the left: potential locations of solar methanol islands; on the right: the distribution of coral reefs in the world.

Solar methanol islands, however, may be beneficial for coral reefs, by significantly reducing the amount of CO2. This gas indirectly causes an increase in water acidification and, as a result, even the dissolution of limestone coral skeletons [1]. On the other hand, certain amounts of carbon dioxide are necessary for the reefs. It is the main source of food for phytoplankton, which in turn feeds many key reef species and, by no means, not only them [2].

Project on a massive scale

Such issues wouldn’t raise any doubts at all, if it wasn’t for the assumed scale of the undertaking. A single solar island would consist of 70 photovoltaic panels and would occupy about 1 km2. The authors of the idea assumed that in order to offset the emission of carbon dioxide from the combustion of fossil fuels, such islands would need to be installed in a number of about 3.2 million. This would mean taking the surface area (not counting spacing between the islands) equal to two Gulfs of Mexico – all along valuable natural coasts.

This seemingly very good idea has not been thought over in a few more ways.

Keep in mind the worst scenarios

According to scientists, there are several methods for extracting CO2 from water. You can either heat it to 70 degrees Celsius or change its pH to more acidic (around 5 pH). Both processes would, of course, take place inside a closed, complicated machinery. What, however, in the case of leakage of systems or their failure? Unfortunately, there is always a risk of malfunction, in this case unintentional water acidification or increase in its temperature. If we are talking about islands in the number of millions, the probability that something will go wrong increases.

A huge risk would also be posed by temporary storage and transport of methanol itself, which is a very toxic substance. Both its consumption and dermal contact may cause burns, loss of sight or even death [4]. This is the case with people, but it’s not difficult to imagine that contact with this substance would be equally tragic for marine animals.

Spill of this highly toxic substance could also occur during its transport by sea. Ecological disasters caused by leaks from tankers have already happened many times.

It seems that when dealing with highly toxic methanol in the aquatic environment – and the extremely valuable one – it’s simply too risky. The idea seems to be a big chance, but also a huge challenge (as the authors admit themselves). Undoubtedly, this is a good starting point, but certainly not a ready-made solution to climate problems.

Shrimps and clams - the real cost of seafood