Syngas, produced mainly from fossil fuels and biomass, is an important raw material in industry. Some see it as a chance to replace highly emissive fossil fuels. It’s believed to effectively fuel important production processes and internal combustion engines. However, no one is completely satisfied with the solution based on fossil fuels. It’s not exactly renewable and emission-free. Therefore, for several decades, scientists have been making efforts to produce syngas using processes inspired by nature and nature-friendly. This resulted in artificial leaves able to produce syngas using only water, carbon dioxide and sunlight.

What is syngas exactly?

To understand why artificial leaves can be a breakthrough, it’s also worth understanding the essence of what they produce. Syngas, otherwise known as synthesis gas, is a mixture of carbon monoxide and hydrogen. It’s used for various production processes, including the production of ammonia, methanol and ethanol [1]. It’s also used in generating electricity, plastics and fertilizers production, and as an agent for producing combustion engines’ fuel.

Syngas can be produced in a variety of ways, including fossil fuels and biomass. An innovative idea is the use of plant mass obtained after phytoremediation [2]. Its utilization, due to the high content of e.g. heavy metals, is quite problematic. This one of not that many ways we can manage such plants safely. However, syngas generated this way is always combined with indirect emissions (although much lower in the case of biomass than fossil fuels). The extraction of raw materials or transport as well as their conversion into synthesis gas is highly emissive. In the case of artificial leaves that use solar energy, only their one-time production is associated with emissions. Therefore, these values ​​are incomparably smaller.

Zero-emissive syngas produced with one device

After many years of trying and several teams of scientists involved in motivating competition [3], we are finally approaching the solution. The first (revolutionary anyway) devices converted atmospheric carbon dioxide into carbon monoxide. This compounds could be used to produce artificial gasoline. First devices could also split water into oxygen and hydrogen, used to produce fuel or fuel cells. Today, it has been possible to combine these two functions and produce energy-dense syngas through only one device.

Artificial leaves developed over the past year are already able to produce syngas in an efficient and environmentally friendly way. Scientists from the University of Cambridge have recently made a breakthrough [4]. The device they developed is inspired by photosynthesis – a natural process in which plants use solar energy to transform carbon dioxide into energy. When the device is immersed in water, one of the two light “absorbers” uses a catalyst to produce oxygen. The second carries out a chemical reaction that reduces atmospheric carbon dioxide and water to carbon monoxide and hydrogen, forming syngas.

What’s more, the device works on cloudy and rainy days as well. Intensive sunlight is not necessary. This the reason, among others, the new generation of artificial leaves is a breakthrough. They’re inexpensive to produce, environmentally friendly and can be used to produce syngas everywhere.

The key to achieving high performance of the device was the use of perovskites for absorbing sunlight instead of traditional materials like silicone. Cobalt was used as a catalyst – an element much easier to obtain than silver and platinum usually used for this purpose. This element is not only much cheaper, but also more efficient while producing carbon monoxide. 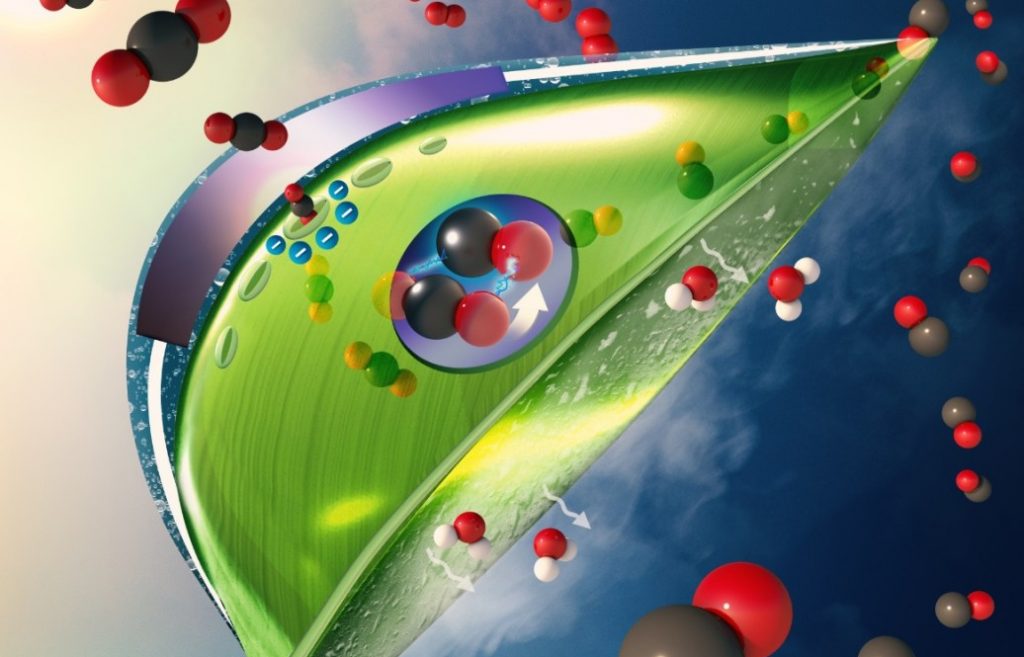 This isn’t all. Artificial leaves, such as the one produced at the University of Illinois at Chicago [5], can absorb huge amounts of carbon dioxide. Scientists say their construction would be up to 10 times more efficient in this process than a natural leaf.

Why syngas and not photovoltaics or wind energy?

At the moment, artificial leaves produce directly only synthesis gas. The next step that scientists are already working on is the production of liquid fuel directly. With no need to convert gas into fuel outside the device.

Although the technological progress in the field of renewable energy sources such as solar farms and wind farms is increasing, the change is taking place too slowly. Launching safe fusion power plants will take many years as well. The metamorphosis of the global energy industry, and thus the development of electromobility are possible, but require time. Our extremely polluted cities and constantly poisoned nature don’t have this time – they need change now.

As long as the demand for fossil fuels doesn’t decrease (e.g. in the case of ships or aircraft), an equally effective and accessible solution is needed. Therefore, it’s possible that the synthetic fuel from syngas, obtained in a sustainable way, could be the solution. It could bring real effects really soon. Its commercial production would also allow the absorption of large amounts of excess carbon dioxide from the atmosphere. Of course, we are not saying that this solution is perfect. It is however very promising and definitely better than what we have to deal with today.

Fusion power is about to revolutionize the energy sector