Home » cannabis » Why do people use CBD? – research
cannabishealth

Why do people use CBD? – research

More and more people around the world see the potential of cannabidiol. Because of its safety and naturalness, CBD has been enthusiastically adopted as an alternative to conventional medicines for various ailments. Last year, two scientists from California decided to investigate CBD’s success and what is the purpose people actually use it for. 2409 US residents were surveyed via an online survey to solve the mystery of why do people use CBD. The results finally shed light on the individual reasons for CBD use and its effectiveness.

Respondents took part in the survey anonymously, and the only criterion for qualifying them for the study was using (currently or in the past) CBD products. Nonetheless, a lot of interesting demographic information can be drawn from the answers.

What may be quite surprising, the majority of respondents (almost 40%) were in the age bracket from 55 to 74 years. What’s more, over 70% of respondents were students or university graduates. It seems that in public awareness CBD is no longer just a curiosity or an experiment, but a solution for people seeking a really effective alternative to traditional medicines. They are educated people who – at least on principle – trust what the scientific community has to say about CBD. On the other hand, it may be people who, as privileged ones, simply have access to knowledge about cannabinoid.

What is the most common way to use CBD? 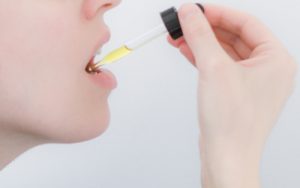 Another surprising fact is that only half of the respondents decided to use only one, proven method of cannabidiol administration. The most trusted way is the sublingual application – both in the form of sprays and oils. Vaporizers are also quite popular. The least often, cannabidiol is used topically. People who are faithful to one method of CBD administration are much more likely to use it for specific medical purposes than people who try “a little bit of everything”.

Why do people use CBD?

The survey also shows that people who regularly use CBD have a specific medical reason for it. The most common ailments that are treated with cannabidiol are chronic pain, inflammation and joint pain, sleep disorders, depression and anxiety of various backgrounds. Somewhat less frequently, but still more than once, CBD is used to treat neuropathy, autoimmune disease and fibromyalgia. The use of cannabidiol to reduce health problems is more often performed by women and older people.

A minority, because less than 40% of respondents use CBD to improve their life comfort and health in general. They also use it with less frequency and without the doctor’s recommendation.

According to study participants who regularly treat themselves with CBD products – more or less satisfyingly, but its usage brings visible difference and relief. The most satisfied with the effects are people who use cannabidiol regularly. In principle, only 4.3% of respondents do not notice the difference. Although CBD works well for a number of conditions, it is most effective in the aforementioned chronic pain, joint problems and anxiety.

What about the side effects?

It is usually people who regularly use CBD for health problems who report side effects. Among them, the most common are dry mouth, euphoria, hunger, red eyes and fatigue. Interestingly, such effects are most often reported when using THC. As more than half of the respondents also pointed to regular smoking of marijuana (perhaps because of their interest in cannabis, it was easier for them to get information about CBD), it is not entirely known if such side effects can be directly related to CBD. The more so because clinical trials don’t indicate such effects of its intake.

Anyway, the potential side effects don’t seem to prompt respondents to abandon their therapies. Even if they appear after exclusive contact with cannabidiol, fortunately most of them are not classified as dangerous (although, of course, they can be troublesome).

Can we trust such surveys?

As the authors point out themselves, participation in the survey was voluntary and respondents were not selected in any way, so it is likely that it was more often filled by people who had positive experiences in advance. The problem in estimating side effects also appeared due to the participation criteria that included all users of cannabis (also those using recreational THC marijuana).

However, the sample was large and varied, which is an advantage for the credibility of the results obtained. As always – it is worth taking such an optimistic study into account, but with a measure of skepticism. If there are indications for it, it’s best to try CBD yourself and draw conclusions by listening to your own body.