Home » ecology » Lungs of the Earth – where does oxygen come from?
ecology

Lungs of the Earth – where does oxygen come from?

The areas that we call the Lungs of the Earth, contrary to their name, work quite the opposite of our lungs. Instead of breathing oxygen – they absorb carbon dioxide, and instead of breathing out this greenhouse gas – they produce oxygen. They are therefore key to climate regulation and the well-being of all life on our planet. Although the name “Green Lungs” usually stands for equatorial forests (e.g. those in the Amazonia), they’re not actually the largest, natural oxygen “factories”. The majority of breathable air is due to much smaller and not-so-majestic ecosystems.

It is known, however, that this repeatedly told myth has no support in scientific research. Yes, Amazon rainforest produces large amounts of oxygen, but consumes a lot as well. Contrary to what is commonly believed, plants not only produce this valuable gas, but also absorb it from the air for the needs of cellular respiration (this usually happens at night). Therefore, the contribution of Amazonian photosynthesis products to atmospheric oxygen resources can be about 6-9% [1]. It’s worth noting that these are optimistic estimates – some experts on the subject believe that the Amazonian forests and organisms inhabiting them (to a large extent microbes) consume all the oxygen they produce [2].

The lungs of the Earts on the ocean

What’s more, some think that all terrestrial ecosystems put together increase the oxygen level in the atmosphere only slightly. True oxygen-forming forests are found not on land, but in the oceans. We will not see them without the help of a microscope or apparatus at space stations. The most important lungs of the Earth consists of microscopic, photosynthetic aquatic organisms – phytoplankton. Phytoplankton, however, isn’t a homogeneous systematic group. It consists of both eukaryotes (organisms made of cells with a cell nucleus, e.g. algae) and prokaryotes (without a nucleus, e.g. cyanobacteria). 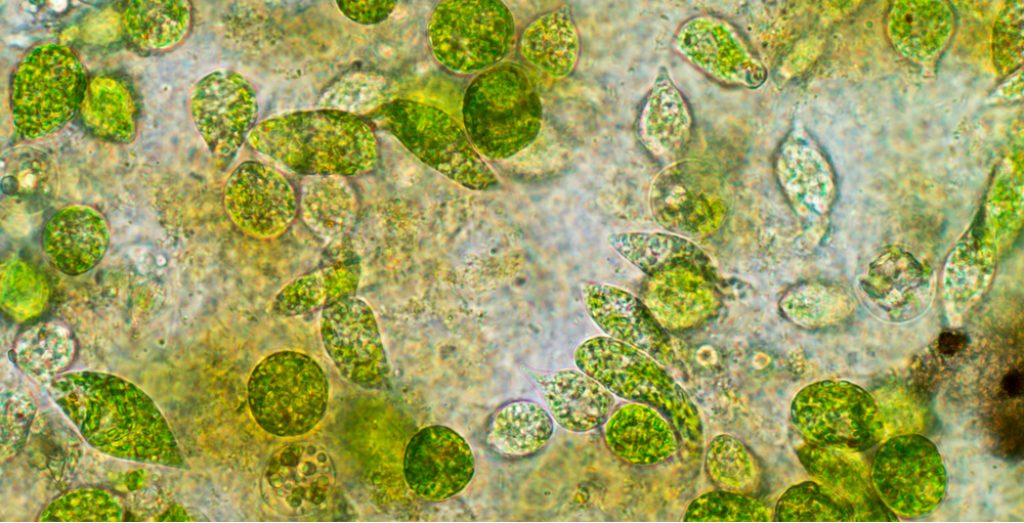 It is those microorganisms that drift near the surface of water tanks that produce about 80% of oxygen on Earth during photosynthesis [3]. Therefore, they are not only the basis of the food chain in aquatic ecosystems and the largest producers of oxygen, but also sequesterate (absorb) huge amounts of carbon dioxide from the atmosphere. It’s also thanks to their deposits, that we can find out how much CO2 was present in the atmosphere millions of years ago.

Phytoplankton is in danger due to climate change

Although it would seem that the phytoplankton lungs of the Earth are climate regulators, they themselves are threatened by the anthropogenic causes of its changes. Contrary to appearances, the amount of carbon dioxide in the atmosphere doesn’t favor them at all. It turns out that due to the warming of the oceans’ water, the amount of plankton has significantly decreased over the last 10 years [4]. Cold water from the lower parts of the ocean, rich in nutrients necessary for phytoplankton, no longer mixes so easily with the warmer layer of water in the upper parts. Therefore, nutrients reach photosynthetic organisms to a lesser extent, which reduces their quantity. The consequence of this may be a larger amount of carbon dioxide remaining in the atmosphere, not captured by deficit phytoplankton. Climate change is therefore continuing, phytoplankton is decreasing (and so on). It seems we have shut the natural earthly processes in a self-accelerating disaster. We may not feel the consequences drastically in the next few years, but one of the next generations will undoubtedly feel them.

Electric cars - are they really eco-friendly? Let's find out.