Home » biodiversity » Chemical weapon in the Baltic, or the monster from the seas
biodiversityecologyhealth

Chemical weapon in the Baltic, or the monster from the seas

There is a monster sleeping lightly at the bottom of the Baltic Sea. He has been sleeping for over 70 years now and can wake up at any time. Respect should be felt for him – he has the power to sweep away all life from the Baltic Sea for hundreds of years. By no means, we are not talking about the Kraken or any other imaginary monster. This threat is very real and, unfortunately, no less frightening. The monster is, of course, highly toxic remnants of World War II. Chemical warfare agents, munnition and leaking fuel from sunken warships stalthily utilized in the deep sea are a real, ticking ecological bomb. Such chemical weapon pose a huge threat to both marine ecosystems and ourselves.

Why are there poisonous trash in the sea?

In the light of a negative social and economic consequences of wars, for obvious reasons little attention is paid to monitoring the fate of toxic, post-war remains. Using the confusion, the parties silently utilize surplus ammunition, chemical weapon and other poisonous agents where they will not be found quickly – i.e. in the depths of the sea.

Such actions today arouse shock and disbelief, but until the 70’s of the last century, they were inscribed in the “war order”. This applies to Europe as well as the rest of the world. Such incidents took place, among others, in the Adriatic, off the coast of Hawaii, Japan, the Irish Sea and the Baltic. After World War II, the United States alone sank 32- and the United Kingdom 175 thousand tons of chemical weapons [1] (of what we know). Until the seventies, the remnants of warfare were utilized mostly this way. In the end, around 40,000 tons of chemical weapons landed in the Baltic Sea after 1945 [2]. According to other sources, nubers reach up to 90,000 tons more [1].

Chemical weapon at the beach

Well – what exactly is this chemical weapon utilized in the seas? The problem is, it’s not known exactly. However, as history suggests, these are largely so-called chemical warfare agents (CWA). Such substances can have a wide variety of effects – from psychotic, through burning and paralytic, to generally toxic. In the Baltic, there are traces of irritants based on sarine, arsenic, phosgene and so-called Tabun. However, the most commonly identified toxic agent in the seas is sulfur mustard, otherwise known as mustard gas. The problem is that before you identify it, most often (a few hundred) people have unpleasantness finding out about its toxicity on their own skin. This was the case, for example, in 1995 at the Polish beach in Darłówek, when children playing near the sea found a container with an unidentified liquid. The mysterious fluid was recognized as mustard gas only when more than 100 children suffered severe burns and four of them lost their sight [3]. 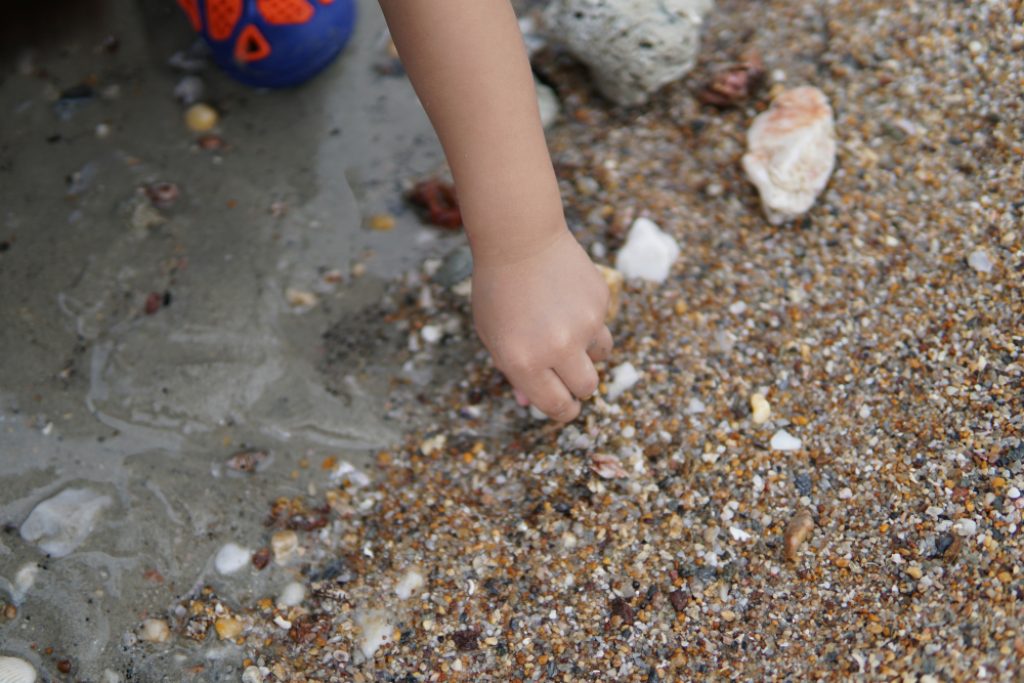 There is another big threat to sunbathers – it’s the so-called white phosphorus, also used as a chemical weapon – also dumped in the Baltic. Contrary to what its name suggests, a lump of white phosphorus lying on the beach turns yellow and resembles amber as a result of contact with light. An inattentive person, who lifts and warms it, can lead to ignition – and this type of vapor is corrosive and causes severe burns [4].

Such incidents have taken pllace many times, it’s loud about them every beach season. It’s not known, however, how often the CWA crates are caught in fishing nets and, when unrecognized, dumped again into the sea by fishermen. Unofficial research shows that such incidents are not rare at all [3]. Unfortunately, the low awareness of the threats lurking at the bottom of the sea exposes fishermen to health loss and hinders the removal of potentially hazardous substances from the environment.

Chemical warfare agents, however, are not all that lies on the bottom of the Baltic Sea as an uncomfortable remnant of wars. It is estimated that there are currently about 300 sunken ships in the Baltic, including 100 in the Bay of Gdańsk [3]. In this case, the threat is the fuel found in the corrosive tanks of the wrecks. Some of them are already leaking with harmful substances – others may collapse at any time. How tragic and far-reaching ecological consequences such a course of events can have, we know from tanker accidents (which, by the way, there are also many at the bottom of the Baltic Sea). Some scientists argue about the harmfulness of sea wrecks, but in fact it’s not clear what to argue about – there is no accurate estimate on this topic. 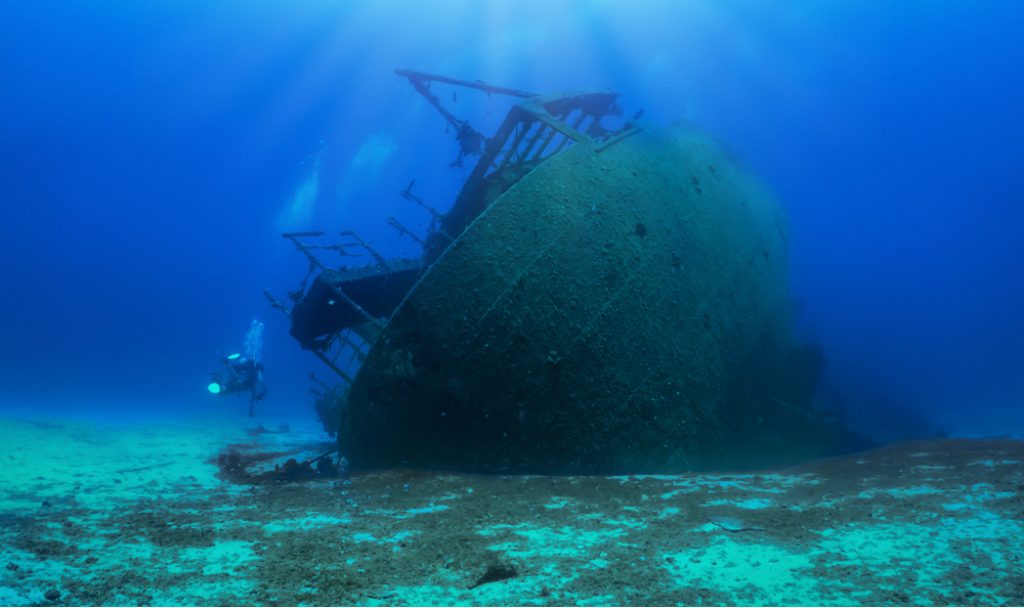 The Baltic Sea is especially in danger

In some places around the world, there is way more toxic, post-war garbage than in the Baltic. So why is it such a problem here, why so many scientists sound the alarm? The main problem is in the geography of the Baltic Sea. It is relatively small and connected to the ocean only through the Danish Straits, so the exchange of water with the ocean is very limited. If chemical spill and fuel leaks intensively from corrosive, outdated tanks, toxical substances can quickly reach lethal levels for all marine life.

According to the researchers, some chemicals lose their toxicity when in contact with water. Unfortunately, however, their hydrolysis products may be even more toxic than the original substance. In addition, the aforementioned sulfur mustard, which is been found in the Baltic in the largest quantities, is poorly soluble in water (so are many other CWAs). Therefore, its high toxicity can persist for up to 400 years [1]. It pollutes mainly the bottom of the ocean, but it gets to the surface along with trawling fishing nets (more on this here). As a result, it burns fishermen, strikes sea animals, and finally gets ashore on fishing boats and caught fish or crustaceans. Sea currents occurring in the Baltic Sea allow chemicals to penetrate from deep into shallower waters as well. Therefore, animals living on the coast and people using the beaches may be endangered.

Scientists and entities responsible for protecting ecosystems and human health, as you can see, cannot mobilize to fight the problem. Research has been carried out for at least a dozen years to estimate the amount of chemical weapons utilized in the Baltic Sea and to determine the scale of the potential threat. Although it was known many years ago, what could be the consequences of stagnation in preventing uncontrolled leaks, activities have still not been undertaken. Conferences are being organized all the time, research is being subsidized, discussed, estimated and predicted – instead of mobilizing forces and starting to remove the problem in practice. Indeed, catching decaying tanks could be risky and the tragedy could happen inadvertently, in just a few moments. However, if it is certain that otherwise it will leak one day, we really don’t have time to think about it.

Even if touching the seabed would be too risky, there is one more puzzling issue. It’s worrying that in one of the three most polluted depths in the Baltic Sea, the Bornholm Deep, huge investments have been implemented for years. The Nord Stream and The Nord Stream 2 submarine pipelines transporting gas from Russia to Germany, envisage the development of this area of the seabed. Now, when the bottom is about to be broken once again, there are voices of opposition, mainly from Denmark. The company responsible for the investment, RAMBOLL OIL & GAS, has already carried out its own research as an evidence of the harmlessness of the investment. Of course, conspiracy theories shouldn’t be our first guess in all this confusion, but such actions, in the light of threats awaiting at the bottom of the Baltic Sea, are highly controversial.

Whatever the truth is – chemical weapon in the Baltic were dumped because of our carelessness, it is the is our duty to deal with this problem realistically, not only in scientific theory.

Vaporization - everything you need to know