Home » biodiversity » Microplastic – what is it and where is it hidden?
biodiversityecologyhealth

Microplastic – what is it and where is it hidden?

In the 21st century, we can no longer ignore the problem and turn our eyes on “eco terrorist’s fabrications” – we know without a doubt that we have a serious problem with overproduction. Or rather, bad distribution and management and unreflective consumerism. It’s all mainly about plastic – in which, ironically, the oceans are drowning. All these straws, disposable cutlery and cups, toothbrushes, plastic bags and bottles – this is really just a part of the problem. Equally, or perhaps even more dangerous contamination is microplastic. The problem is, it’s not as easy to see it with the naked eye. So what actually is microplastic and where is it hidden?

Microplastic, nanoplastic… what is it? where does it come from?

Microplastics are, as their name suggests, simply microscopic particles of plastic. According to official definitions, such particles no bigger than 5 mm, but their sizes can vary extremely. The smallest ones can be invisible to the human eye. Some scientists recognize them as a potentially even greater threat, keeping even a separate category for them – the so-called nanoplastics.

Nevertheless, both micro and nanoplastic are synthetic particles. Typically, such plastic flecks are formed as a result of the breakdown of larger garbage already present in the environment – it’s called secondary microplastics. Primary microplastics, on the other hand, are polymer molecules that are badly disposed (or simply not disposed) waste from factories or flecks used for cosmetics.

It is estimated that the most common source of microplastics are old, worn out tires, synthetic clothing fibers, plastic pellets (used to produce other plastic objects) and paint chipped from buildings and markings on roads. Glitter – beloved by so many – is also an example of microplastic.

So tiny, so ubiquitous

Unfortunately, this exactly how it looks like – microplastics are everywhere. In all tanks, both sweet and saltwater (surface and underground), air, soil and living organisms. All over the world. Somehow, they even got on – as it turns out, not so much virgin anymore – Galapagos Islands. How?

From an old tires thrown into the forest, to the sea mud around an island distant hundreds of kilometers away, it is a long way off. Well, only seemingly. Microplastics are so small and light that it can spread even via wind and rain. Recently, they were found even in the bodies of flying insects. Therefore, scientists detect their traces both on the bottoms of the oceans and high in the mountains (eg in the Pyrenees).

However, this is not all. Each of us has probably seen horror news about the damage caused by floods in urban areas. Perhaps some of you have even experienced this. Such terrible episodes for people, animals and property also have other consequences that are rarely mentioned. All this turbid water and the trash it carries along with the smaller and larger particles of plastic, sooner or later ends where it came from (in the case of tsunamis) or where it was eventually gonna go (in the case of flooded rivers and monsoons) – to the seas and oceans.

The same is with the whirlwinds that rise into the air and transfer everything they encounter for tens of kilometers. Light plastic particles float perfectly – without the slightest resistance – and with equally great ease they fall far beyond human settlements.

Nothing can hide from microplastics

Research carried out in Great Britain showed plastic particles in each of the tested water reservoirs, with no exception. Mikroplastic is in lakes and rivers, regardless of whether they flow through large cities or national parks remote from civilization. The disheveled record holder turned out to be the Tame river meandering through the Greater Manchester There,. 1000 micro-capsules of plastic were detected per 1 liter of water. Even the virgin Loch Lomond lake in Scotland hasn’t been protected from microplastics – even there, on average, 2.4 particles of synthetic polymers per 1 liter of water occurs.

Watch what you drink!

Alarmed by the deteriorating state of affairs, scientists at Fredonia State University of New York decided to investigate the water we drink. For this purpose, 259 bottled waters from various sorts, from various companies and from different countries, were taken under the microscope. The results are terrifying – up to 93% of them contained microplastics. According to calculations, on average, along with 1 liter of bottled water, we drink about 10 particles of microplastics larger than 100 micrometres and as much as 325 smaller ones. One of the Nestle Pure Life bottles was record-breaking -10,390 plastic particles were detected.

Frightening, right? Concerning also the harmful plastic, in which such “plastic” water is packed, buying bottled water does not seem to be reasonable, either for health or ecological reasons (not to mention economical). Unfortunately, microplastic can’t be avoided completely. Tap water also contains it, although its quantity is twice lower than this of bottled water.

Microplastics we have in blood! In guts and lungs, I mean

Drinking microscopic particles of plastic with water is, unfortunately, not the only way they get inside our body. We drink microplastics with almost every drink, be it Coca Cola, Pepsi or 7Up. All of them contains them (at least those that have been tested). Plastic can get into our digestive system even with beer, sugar and salt. Not only can, it certainly does – research confirms the presence of microplastics in every sample of human excrement tested. Most often, alongside waste products, we expel polyethylene (PE) and polypropylene (PP) – in an average of 20 molecules per 10g of feces. 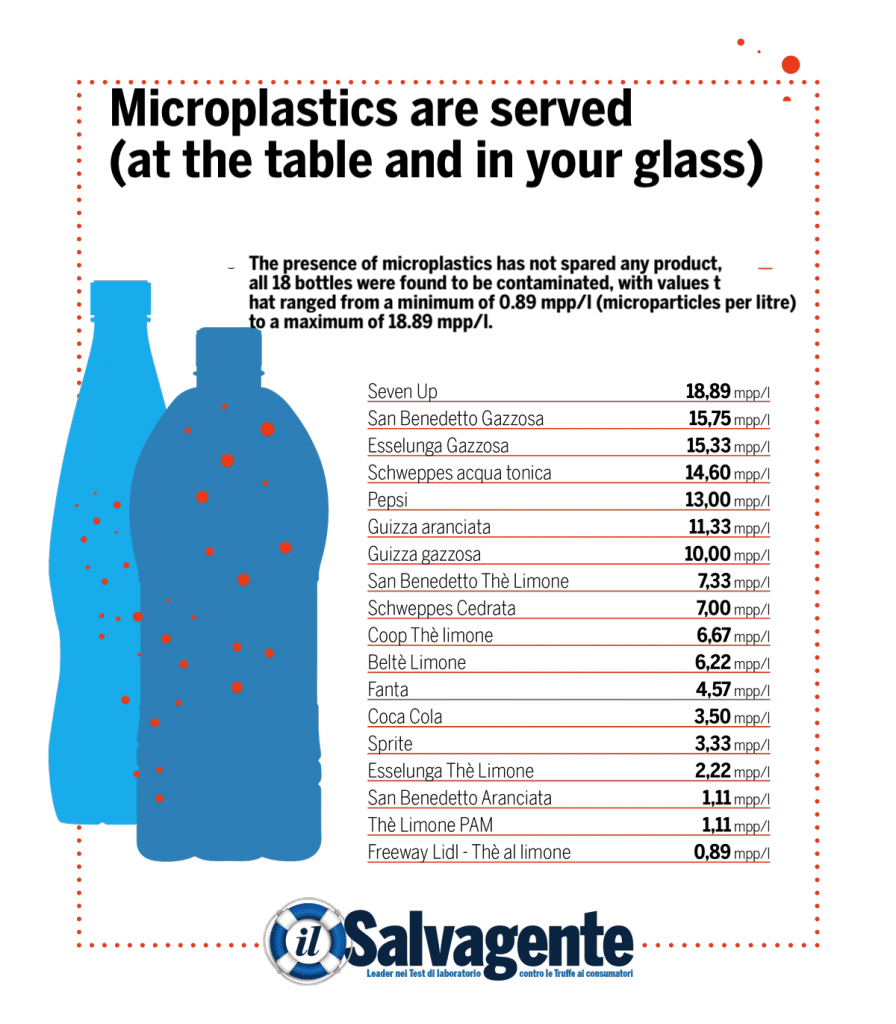 It’s still not everything. Microplastics can also be inhaled with contaminated air in the form of fine plastic fibers. This part of them, which our body will not get rid of at the very entrance, may settle in our lungs causing a number of biological responses, such as inflammation. Dyes and plasticizers added to fibers can be potentially carcinogenic and mutagenic.

However, we still know relatively little about the effect of microplastic on human health. We can definitely say more about marine organisms in this context.

The most basic link in the food chain that comes into contact with microplastics is zooplankton. As simple organisms acting mostly on impulse, these microscopic animals have a problem with distinguishing organic molecules from plastic particles. This, in turn, may reduce their reproductive success and clog the digestive tract, leading to reduced food intake and high mortality.

Such a course of events can have enormous consequences for entire marine ecosystems. Excessive development of phytoplankton and algae, which zooplankton feeds on, can lead to eutrophication of water and hence to high mortality of other organisms inhabiting it. On the other hand, too little zooplankton, which is the food base for many marine animals, can lead to trophic cascades and catastrophic consequences for ocean-wide biodiversity.

As in the case of zooplankton, small crustaceans (such as shrimps) or filtering molluscs, unintentionally ingest microplastic, which is bioaccumulating at higher trophic levels. For example – if the shrimp eats plastic particles, the fish eats a few shrimps, and the larger fish eats several such fish – microplastic is accumulated in its body (often reaching toxic level). With the same principle, nanoplastic can be accumulated – as it turns out, even in the fish’s brain (it crosses the blood-brain barrier, which causes, among others, behavioral abnormalities).

As it is not difficult to guess, later on we eat such organisms ourselves (at least some of us). What can be the far-reaching effects? No one really knows.

Microplastic is a man thing. Do we really want it to be this way?

We know, however, that microplastics are already common on Earth. Some scientists even suggest to designate its ubiquitous deposits as an indicator of a new human-dominated geological era – the Anthropocene. Are we really so damaging to our own planet to determine our presence by the litter deposits? Everything indicates we are.

It seems it is only in recent years that we are beginning to globally recognize this problem and slowly introduce changes to our economy. They may turn out to be too slow – but it depends on us. After all, ordinary consumers are the driving force behind change. It is, therefore, really worth giving up disposable plastic wherever it is not really necessary. Let’s take a cotton bag for shopping, let’s not use disposable cutlery and plates, and let’s order coffee in our own cup (in some cafes you will even get a discount for that!). These are not only tiny gestures – it can really make a difference.